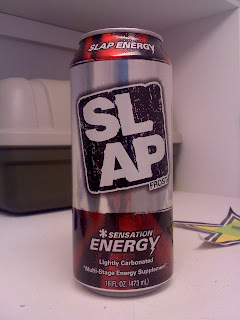 Ordinarily I consider a beverage’s presence at Wal-Mart sufficient grounds for a 10 for ease in acquisition; however, Wal-Mart is the only place I’ve seen that actually carries this stuff, for once providing something that’s (somewhat) out of the mainstream.  Given the near omnipresence of Wal-Mart here in the States, finding any Slap Energy product should still be, by and large, a fairly effortless endeavor.

As a general rule, I don’t favor the expansive exposure of aluminum on energy drink cans—it makes me think of the sugar free and low carb versions of drinks, which seem to almost scream “STAY AWAY” just by that getup (see the sugar free versions of Amp Energy and NOS for examples of this phenomenon), but even still, I think Slap Energy does an alright job with their packaging—somehow, the red and black plus the metallic light grey of the aluminum work together well here.  In addition, I couldn’t help but smile as I read the spiel on the side of the can immediately to the left of the front, which starts off by saying, “Hello…Thanks for checking out this part of the can.”  I like a little attitude in an energy drink.

Slap Frost provides an unusual variation on the Red Bull clone trend, and one that I don’t think works especially well.  The namesake of the drink is in reference to an unnamed ingredient added to provide a unique cooling sensation to the drink, which presents itself as sort of an after-effect once the drink has been swallowed…a sensation akin to consuming something cool with mint in it.  I’m not sure if this ingredient is what does it, but there is something that mars the energy drink flavor by its presence, which I find difficulty describing…almost kind of an earthy, dirty taste.  Not extensive, but definitely noticeable.  While I’ve got to give props to Slap Energy for trying to provide something different (very refreshing to see that somebody actually cares about that), the result isn’t entirely successful.

This stuff wastes no time getting started, and once you’re going, you’re going strong.  This is the first energy drink I’ve had that’s actually given me the shakes at the start, which will make it great for a long evening of studying and what not, but something I would definitely stay away from if one plans on operating heavy/dangerous machinery that requires precision of the digits, at least for the first little bit after drinking it.  The effect didn’t last long, but it is still worthy of note.

Slap Frost possessed a very impressive longevity, lasting for several hours before I at least ceased to feel the effects thereof.  Equally impressive is the lack of crash at the end of the road; once it’s over you’re simply back to normal.

All in all, I was pretty impressed with the performance of this drink—just got to fix that flavor; with the low price (only 98 cents plus tax) and a kick like this, Slap Energy products could wind up as some formidable competition to just about any of the current mainstream energy products (Monster Energy, Rockstar, Amp Energy, etc.).  I will reiterate that the brief period of the shakes at the beginning makes it a risky choice if you’re going to be working with stuff like buzz saws and the like immediately after consuming it—notwithstanding the brevity of the phenomenon, it could still present problems; I’d wait at least a half hour after drinking it if you’re going to be doing anything of the sort.