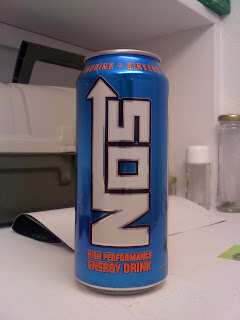 I didn’t have any difficulty finding NOS; it seems to be just about anywhere I go.  It is perhaps a hair less common than drinks like Rockstar and Monster Energy, but not enough to make any appreciable difference in commonality. 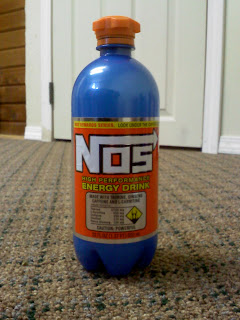 Given the simplicity of NOS’ can design (basically just the NOS logo written vertically front and center), it relies heavily on color schemes, which can make or break the look.  In this case said scheme more than makes it—the original is the best looking of all NOS products, featuring metallic blue and orange in a combination far more effective than most I’ve seen.  On the bottle, the logo is smaller, horizontal, and far more orange is exposed, which doesn’t work quite as well as in color scheme in my opinion—but the cool design of the bottle and the resealable cap more than makes up for it.

The taste is easily recognizable as passion fruit—original (for the most part) and very tasty.  There is an aftertaste that sticks around for a while after the fact, but it is not at all unpleasant and certainly not worth docking a point over.

I have never before been at a point where I was so wired but experiencing so few jitters as I was when I drank NOS.  The kick is effective, make no mistake about it—it manages to deliver every bit of energy the drinker could need and then some—but there seems to be a smoothness to the action that is not present in similar drinks, delivering a high degree potency without somehow delivering it in excess.

NOS’ longevity is exceptionally impressive, and for that, it earns the 10/10 in this category.  Notwithstanding, a word of warning is needed—you will probably experience a crash once the effects of NOS wear off.  Not a mere fender-bender, but a violent collision with a cement wall, complete with explosion, fireball, the works.  As long as you’re not driving all day AND all night you probably won’t have to worry about it, but just in case, you have been warned.

Aside from the crash, I can’t really find anything bad to say about NOS.  It tastes great, works well…what else can you ask for?  Seeing as I can’t think of anything, I’m awarding it a perfect score, and put forward my recommendations that it be considered for consumption in the event of just about any feasible energy-requiring situation.

When I grabbed my bottle of NOS from the local grocery store, I had a pretty good idea what I was getting into.  359 mg. of caffeine—that’s some serious shiz.  Anyway, I took it down pretty quick (it’s an agreeable beverage…I actually could have drank more), and it did hit hard—but not the balls-to-the-wall intense that I was expecting.  I mean, I can’t really complain, but I was expecting a little more.  Little did I suspect what was waiting for me over the next 12 hours.

Yeah, you read that right.  FOR 12 FREAKING HOURS, I WAS UNDER THE INFLUENCE OF THIS DRINK.  It was insane.  There was a time where I thought I might have been crashing, but I took some oat straw (long story), and I was buzzing like it had never happened (for the record, it was a caffeine overload—not a crash…big difference).  Anyway, I drank it at about 10 in the morning, and it was 10 at night before I started to feel tired again.  So…I thought I was getting kind of screwed in terms of kick, just because it wasn’t 24 oz. Rockstar Zero Carb-esque.  Well, NOS, you proved me way wrong.

What other rating am I supposed to assign to this drink?  I love the taste, and this drink lasted longer than any other drink I’ve had to date.  In all honesty, I find it hard to think of a beverage that requires 10+ intensity, but 10+ duration—that’s another matter entirely.  If you’re going to need something for the long haul, don’t grab anything before a bottle of NOS.