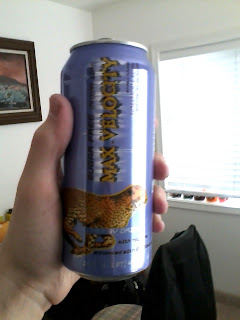 These have been a lot more hit and miss lately than they have been in times past.  These used to be sold en masse at every Albertson’s store, but it seems the number of stores that sell them are dwindling.  If interested, I’d pick them up sooner rather than later.

Most bargain energy drinks lack something in terms of packaging, but this one really takes the cake for cheesiness, owed especially to the stock cheetah graphic.

Not as bad as I thought it would be—in a lot of ways, it’s actually very similar to Loop Pomegranate Blueberry.  Like the latter, it’s got a really scary deep purple color, such that I was a bit worried that by drinking it I might wind up looking like a death metal grape.  Like the latter, it’s also got a decent sour pomegranate flavor with the berry taking the back seat, and is not benefitted by its artificial sweetener blend.

Actually did better than expected in this regard also—I got a good functional boost out of this, full of clarity and alertness and further characterized by a lack of jitters.

The kick was so nice as far as intensity is concerned, in fact, that I really think it’s too bad the effects didn’t last very long—about two hours passed before I was ready for a nap.

Alas…if it weren’t for the fact that this isn’t reliable when it comes to longevity, I could have recommended this drink to open-minded energy seekers, but as is, I’ll have to advise passing on it.