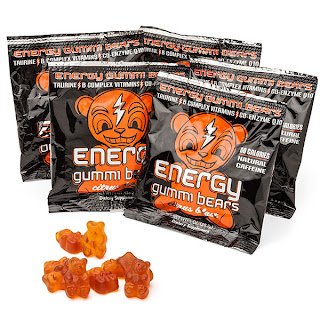 Readily available online, but if you’re going about this the old-fashioned way (as I typically do…hence my bothering at all with this section), the only place I’ve seen these is at a Chevron in La Grande, Oregon.

As far as marketing itself as an energy product, Energy Gummi Bears does just fine.  There will be no mistaking this for the other non-caffeinated confectionaries at the front counter of gas stations, nor will it be something easy to look over as you make your purchase; with its bold coloration and design it is as up-front a product as you could ask for.  I have knocked off points for the bear depicted on the front, if nothing else because I find it singularly disagreeable to look upon.  I suppose it’s easy enough to be determine that the bear is supposed to be buzzed, but something about the way he’s smiling or the way he looks at you gives me the creeps—kind of the look you’d expect of someone watching you shower through a hole in the wall.  In brief—keep the audacity, lose the perverted/diseased bear.

I like Gummi Bears as much as the next guy, and by my estimation, these do okay—I don’t think they taste all that much like the advertised citrus, though.  If anything, they remind me of a semi-weak black cherry flavor, maybe with a hint of the Red Bull flavor or some constituent of it.  I’d have been a little happier with a variety of flavors (especially pineapple), but as these possess the proper texture and no bitterness, I don’t really have a lot of complaints in this department.

You get about what you would expect out of these, and at 35 mg, I wasn’t expect a whole lot.  You might notice after eating them that you don’t feel quite as tired as you did when you woke up, or that you aren’t craving caffeine quite as much as you did before (as in my case), but in terms of an actual boost, I wouldn’t bet on these.

The barely-perceived boost lasted all of 30 minutes.  NO need to comment on the lack of crash.

Aficionados of the original Gummi Bears might not mind the new flavor, but as far as energy products are concerned this one is more or less a dud.  If you're going to eat four or five packages, you might get something, but at $1.50 each, it's not something I would recommend.