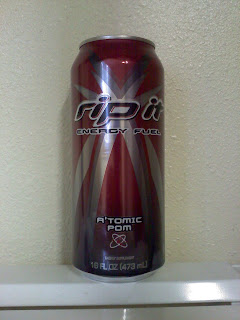 Rip It A’tomic Pom isn’t found at every bargain/dollar store that the original is, but isn’t by any means uncommon—more a matter of making a stop at a second store than active hunting.

I still can’t say I’m wowed by the overall layout, but the extensive use of dark red leads A’tomic Pom to be far less bland the can of Rip It—Power.  I do have one complaint, which if I don’t address here I won’t be able to—the apostrophe in A’tomic Pom—why is it there?  ‘Atomic Pom’ works just fine, why not just leave it at that?  I don’t mean to nitpick, neither do I mean to unnecessarily draw out the ‘appearance/presentation’ section, but there’s no ‘grammar’ section in my review, and this really bugs me—it just looks ridiculous.

Pomegranate is one of those tastes that’s really tough to nail—any attempt at it will typically either tank or excel, with very little room in between.  A’tomic Pom is a rare exception to this rule—the result is average.  On one hand, I can actually taste pomegranate, which I like.  On the other, it is also somewhat of an artificial soda-esque quality to it, which kind of mars the experience.  My advice?  If you’d like a pomegranate energy drink, see if you can get your hands on a 50% juice formulation of Rockstar Juiced—Pomegranate.

The kick is what I’d call on the high end of average.  It’ll wake you up, it’ll give you a good case of the jitters, etc.

I got about 3½ hours of efficacy out of this.  Not bad, but nothing I’m terribly excited to report.

So…Rip It—A’tomic Pom isn’t bad, but other than the fact that it actually something like pomegranate I found it to be effective but terribly unexciting.  If you must, I suppose there’s nothing to be lost in trying it.  Just make sure you eat really well for the rest of the day—the quantity of high fructose corn syrup in the stuff kinda made me cringe.