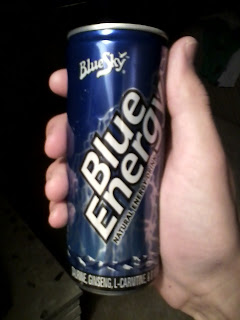 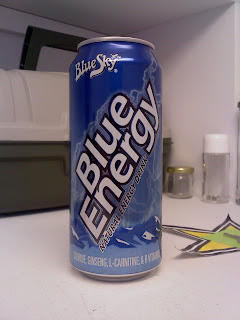 Another one that’s plenty hard to find, at least around here.  On the western seaboard, it’s found at every Safeway store I’ve been to, so if you live near one of those, this shouldn’t be hard to find.  Otherwise, you’re pretty well out of luck.

I like the look of this one…nice blue color, mountains in the lower background, lightning bolts, etc.  It’s a nice change from yesterday’s Spike Hardcore Energy—The Original (which may be in part responsible for today’s headache, the kind I tend to get when I sleep poorly).  Rather than saying “I WILL kill you,” as Spike did, this one’s message is a little more mild, promising a needed boost rather than caffeine Armageddon.

Above the supplement facts to the right of the front of the can are the words “WILD BERRY FLAVOR”, so I more or less had an idea what to expect…or so I thought.  I open up the can, and…what the frick?  Do I smell Red Bull clone?  I take my first sip, and—sure enough—it’s the traditional energy drink flavor, a little less sweet than Monster Energy or Knockout Energy and definitely less bitter in terms of aftertaste than Red Bull itself.  Another interesting thing…the drink’s not even blue.  It’s a reddish-greenish-I-don’t-know-what-else-ish color.  All that aside, even as unoriginal as it is, I do like the flavor, and it is different enough that those who find something unsatisfactory about Monster Energy or Red Bull might find something to like in Blue Sky Blue Energy.

You’re not going to get a whole lot in terms of energy from the 8.4 oz. can alone—enough to perceive, but not enough to actually do a whole lot.

Hard to gauge, but definitely less than an hour and a half.

The 16 oz. can packs a passable punch, producing a noticeable increase in energy with side effects more along the lines of increased chattiness than an excess of jitters.  While it’s not the strongest thing I’ve ever experienced by a long shot (which today I’m okay with), it is still acceptable, managing to outperform in this regard at least a few of its peers toting the same flavor or a variant thereof.

The highest point of energy didn’t last especially long (perhaps an hour or so), though a passable state of alertness lasted a good few hours before it started to wear off.  The end period of effectiveness was fairly uneventful, coming without a crash and leaving me feeling more or less normal, if a tad sleepy.

Okay…so out of this experience, we get that the traditional energy drink flavor and wild berry flavor may be the same thing, at least according to the Blue Sky Soda Company—who knew?  My preoccupation with the Red Bull flavor aside, Blue Sky Blue Energy didn’t lack much and I did enjoy drinking it, and don’t have any reservations against recommending it to those who are willing to give a modest variant of the traditional energy drink flavor a shot.