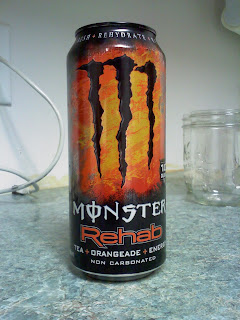 Still emerging, so for the time being somewhat uncommon.  Will update as time goes on….

Would love to be able to find a better word for it, but…can’t.  The can is b*tchin’.  It doesn’t really make me think of orangeade (maybe it would be more appropriate if it had been blood orangeade?), but who cares?  The orange colors in the background gives the impression of smoldering embers, which, coupled with the black M in the foreground and the black can, make this one of the most effective Monster Energy packagings to date.

With the exception of Protean, which, let’s face it, is just bizarre, all members of the Rehab line have proved themselves to be tasty and refreshing.  The new Orangeade continues in the footsteps of Lemonade, Green Tea, and Rojo Tea in that respect—the drink has a convincing orange flavor and is not at all chemical-y, is well complemented by the earthiness of the black tea extract, is well balanced in terms of the strength of both flavors, and is enormously pleasant.

This is just like the other Rehab drinks—strong, but not supremely potent.  I drank this to give me boost enough to make it through the rest of the day, and it did just that, but the quality of it strikes me as more of a recovery drink—a drink for the post energy-requiring event rather than pre energy-requiring event, if you will.

None too shabby—4 hours or so passed before I felt that this one had worn off.  No crash to report.

Monster’s got another winner on their hands with Monster Rehab—Orangeade.  I’d elaborate further, but it sufficeth me to say that this is just an awesome all-around energy drink, and a splendid for its rehab purposes.  Fans of the rest of the line or fans of energy drinks in general will certainly find something appealing in this one.