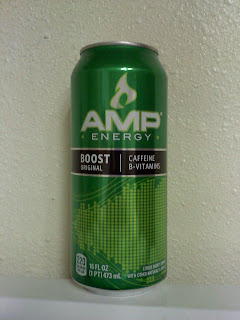 NOTE: So far as I’m aware, this is not a new energy drink, just the same old Amp Energy repackaged and renamed.  So take heart, Amp lovers, you’re beloved beverage has not been discontinued.  So you ask—why are you doing an entirely new review, if it’s nothing new?  Principally because there are people out there who are going to search for a review of this beverage, and I, being a man of the people, am happy to deliver. 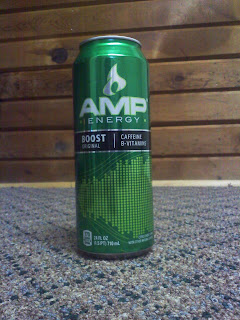 By and large, this is an extremely easy to come by (this refers to the 16 oz. can—the 24 oz. version is much more difficult to track down).  Once was at a gas station where they didn’t have it, but let’s face it, the place was a bit…backwards.

The original Amp wasn’t one of the drinks that benefitted from the change of packaging.  I liked the old look—in my original review, I likened it unto a “green aurora borealis.”  With the new look, Amp seems to be trying to refine the image, with a clearer label and a sound wave made out of dots or something like that.  In any case, what gets to me is the color—it doesn’t matter how well the layout works; I can’t look at the dang thing without thinking about grass—which doesn’t scream “ENERGY!” to me.

Anyone who’s reading this who has had the newly packaged drink already will know this, but for those of you who haven’t—taste is the same as the original.  Little bit of orange, little bit of passion fruit.  Not exactly the most balanced in terms of sweet and sour—leans a little more on the sweet side than I care to have it lean, a characteristic that is especially tiring when you’re drinking the 24 oz. can.  But you Amp fans can rejoice, because your energy beverage of choice is still here.

In addition to there having been no change in the flavor, no change occurred in the energy blend or the caffeine content.  Consequentially, the kick’s about the same—which is to say, average.  On the plus side, though, I did notice that getting my job done at work seemed all that much easier as a result of my having drank it.  Seems that Amp’s just one of those drinks whose kick isn’t immediately obvious, but gives just enough boost to make life easier.  Ah, heck—I’ll give it a 7 this time around for that.  Didn’t seem all that different until I was actually doing something, at which point I noticed.

This one lasted about 3 hours before the end rolled around, at which point there was no crash worth reporting.

Those of you who know and love Amp can keep doing so.  For those who haven’t—I’m not really a fan.  There are drinks that taste better and are stronger—and personally, I’m inclined—still—to go with those.

Honestly, the kick contained within the 24 oz. can wasn’t too shabby.  It was strong enough that I was fairly awake driving home after a day of walking under the hot sun at the Boise Zoo, helping my wife haul both children from exhibit to exhibit.  There are also jitters to spare—I’m hard-pressed to remember a time a drink managed to get me so chatty.

I got about four hours of power out of the big rig before I reached a distinct finish line, with enough of a crash to notice, not really enough to hold against it.

You can expect the 24 oz. Amp Boost—Original to perform well, but I don’t think I’ll be giving it a go a second time.  Frankly, I consider the beverage to be overrated—the 16 oz. can doesn’t offer all that much of a boost, and it doesn’t taste good enough to keep finishing the 24 oz. can from being a chore.  Like Amp?  Go ahead and get the big can, if it proves more economical than buying two smaller ones.  Otherwise, don’t bother.