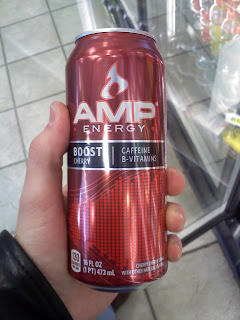 NOTE: When this first came out, the caffeine content/energy blend led me to believe that this was just a repackaged Overdrive—but now people are starting to tell me that Amp's done some tweaking.  Thoughts?

As common as any of ‘em.

Red looks just as good on the new, more refined Amp look as it does the old.  No complaints here.

Alright, alright—I know what you’re going to say here—“Hey, last time you reviewed this drink, you hated it!  And now—you’re giving it a decent score?  What gives?”  Well, here’s the deal—first time I had this, I drank it straight out of the can, and yes, it tasted pretty bad.  This time, however, I had it on the rocks—and it tasted alright.  Nothing spectacular—but decent, and like cherry.  Here’s a perfect example of how the way you have the drink affects the flavor—something that seems nasty out of the can may taste great on ice, and vice versa.  So if you’re going to drink this one—I definitely recommend some ice.  You’ll regret it if you don’t.

Drinking this on an empty stomach, I found the intensity to be about average—mostly manifest as heightened alertness, with few jitters.  Expect less if drinking with a meal.

If I hadn’t been sure before that this was just a repackaged version of Amp Energy—Overdrive, the fact it was would have been established with certainty by the spectacular longevity of the drink.  Timing my buzz, I found that I got a good 5-5½ hours of solid energy before finishing without a crash.

Having tried it on the rocks, I feel far more inclined to state this time around that Amp Boost—Cherry is a worthwhile beverage.  As long as you’re willing to drink it thus, you’ll enjoy a decent taste with notable efficacy.  If you’re drinking it straight from the can…well, at least you’ll still be able to enjoy the kick.