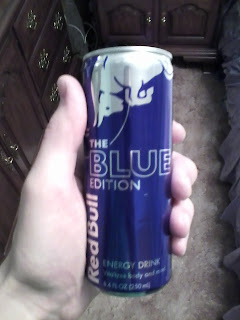 Yesterday in my review of The Red Edition, I noted that these are not nearly as widely distributed as the original flavors—the website claims that they are only sold at exclusive clubs in a handful of large cities, and 7-Eleven (where I bought them) claims they are only being sold at 7-Eleven.  So, doing a little Internet “research”, I learned that these are sort of an experiment—the idea is to distribute just to 7-Eleven, which is one of the nation’s largest Red Bull retailers, and see how well they are received—and if things go well, these just might go national.  To give you an idea as to how it looks like this is working: I stopped at one 7-Eleven, drawn in by the Red Bull Editions sign.  I walked to the Red Bull cooler they had there, and I found them—well, two of them.  The Blue Edition had been completely cleaned out, and only a very small supply of the Red and Silver Editions remained.  I had to travel about five minutes more to the next closest 7-Eleven, where I was able to grab a can of The Blue Edition—though supplies at this store of all three flavors were wearing thin.

I’m really quite enamored with this little can.  As I indicated in my review for Rockstar Zero Carb, I’m a real sucker for blue and silver together—and when you couple that with the calculated minimalism of this new Red Bull can, you get one heck of a striking product.

After enjoying The Red Edition so thoroughly, my mind was quite open for The Blue Edition—despite the low standard set for the enormous amounts of drinks toting the ever-derivative “blueberry pomegranate” flavor.  I popped open the can and was almost immediately hit with the strong smell of fresh blueberries—a good sign, since the blueberry pomegranate cliché tends to have more of a vague berry smell.  Then I poured it over ice and took a swig….

HOLY FLIPFARTS THIS IS A FREAKING DELICIOUS ENERGY DRINK!  I honestly thought I was drinking carbonated blueberry juice—it really is that good.  It even manages to avoid the propensity of blueberry-flavored products to taste dry—no hint of that there.

Whatever you say about the Red Bull Company, you can’t deny that they go about their innovations in a very calculated, meticulous fashion—if you remember the (sadly) discontinued Red Bull Cola, you know what I’m talking about.  You can taste this attribute in The Blue Edition through and through—Red Bull knew exactly what they were going for, and they really hit the nail on the head in terms of execution.  Very well done, Red Bull.  Very well done indeed.

As I noted in yesterday’s review of The Red Edition, 8.4 ounces of a Red Bull product doesn’t go all that far, but it is good for a mild boost/clearing out of the cerebral cobwebs.  I also said that The Red Edition might be my go-to beverage for that sort of thing—but as delicious as The Blue Edition has proven, I think that Red will be coming in second.

I was able to get two and a half hours of energy out of one can—with no crash.  As I said in yesterday’s review, its applications are somewhat limited in terms of intensity and duration, but within that sphere of applicability, there is nothing better.

Even if The Red Edition won’t make a Red Bull man/woman out of you (it did me; the fact that it was surpassed by The Blue Edition was just an added bonus), The Blue Edition is almost guaranteed to do so.  I don’t care what your thoughts on the original Red Bull or the company in general are—they have made one heck of an energy drink here, and it is worthy of any energy drinker’s consideration.  As for myself, I hope that these Editions will be a hit, because I would love to make these a staple, and that they start to produce it in the 20 oz. cans—because that seems to me to be just the right amount to consume in one sitting.