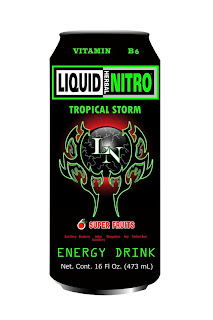 Liquid Nitro isn’t very common as a general rule, but it is starting to pop up at more and more locations.  When it hits Idaho, you’ll be the first to know.

I can’t say I really get what Liquid Nitro trying to do with this new design—I mean, I can say it’s kind of a shift from its former Red Bull-esque, minimalist motif to a more hardcore, Monster-esque look, but I don’t know that I really get the combination of the lightning ball/Klingon bat'leth they used here…I guess it looks alright, and that’s all they really care about.

More often than not, I’m not into really sugary energy drinks.  My favorites (with a few exceptions) are mostly low carb or low calorie or whatever you want to call it, but on occasion I do find a decent sugary energy drink.  My personal favorite is still Monster Energy—Heavy Metal, but this one is not shabby at all.  The flavor is exactly what you’d expect—a blend of tropical fruits, all homogenized to the point where very few (pineapple, guava, etc.) are really distinct, but regardless taste good enough that I wouldn’t mind trying it again at some future point.

It seems that “the high end of average” is becoming the new average—not that I mind, but I am getting a bit tired of reporting this degree of energy.  You won’t be short on alertness or jitters, but if you’re looking for something remarkable kickwise this isn’t the way to go.

Three and a half hours passed before the sugar crash came—which wasn’t the worst I’ve ever had, but still wasn’t terribly agreeable.

Tastes good, kick’s decent…if you’re a fan of sugary Rockstars or Monsters or any other number of drinks on the market today, you’ll like this one.  Even if you’re not…well, it still tastes good enough to try at least once.