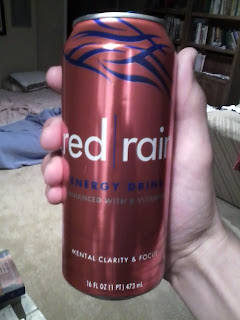 This is another drink I found at Dollar Tree.  So far as I’m aware, this is a store with a very steady inventory (vs. that of Big Lots, which is constantly shifting), so check there if interested.

This is the sort of energy drink that is very easy to look over, especially to the casual energy drink seeker—mostly because it doesn’t much look like one; I only recognized it as one because I was on the hunt for new acquisitions, and am in the habit of double-checking these sorts of things.  Anyway, red can with blue pinstripe design doesn’t really scream ‘energy drink’ to me, and probably won’t to most anyone else.

Red Rain is a Red Bull clone, but it truly isn’t a bad one.  It tastes cleaner than most (take Wired for instance), and leans more towards being sour than anything else.  It does have a bitter medicinal aftertaste that kind of reminded me of Red Bull, but other than that, I found myself drinking a Red Bull clone and not feeling antagonized at the fact—which hasn’t happened in a long time.

Red Rain’s caffeine content is fairly modest (same as an Amp), so you can expect a boost that’s pretty typical of drinks in that category—it’ll wake you up, and even make you slightly jittery for a bit, but it won’t really produce anything memorable.

Effects were discernable for about three hours, after which there was a wearing off, but no crash.

In the end, Red Rain was an average energy drink experience, but not so deliberately so that I felt affronted by it.  If you’re into Red Bull clones and aren’t looking for a huge boost, I’d give Red Rain a shot.