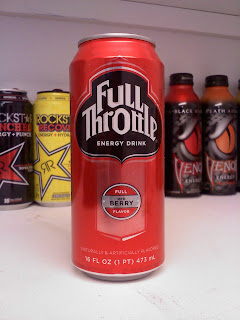 EASE IN ACQUISITION—7
Full Throttle—Red Berry isn’t quite as easy to find as the other two Full Throttle flavors, but it’s still not hard.  My experience is that you tend to see it more in gas stations and smaller convenience stores as opposed to larger establishments like Wal-Mart or WinCo.
APPEARANCE/PRESENTATION—8
Looks every bit as good as the other two flavors in the Full Throttle line, exhibiting that same understated toughness that Full Throttle pulls off so well.
TASTE—8
The experience taste was positive, especially after having drank Full Throttle—Blue Agave and Full Throttle—Citrus.  It was predominantly strawberry-inspired, though I did get a little bit of raspberry in there.  It was really quite pleasant, and I had no trouble downing it in a jiffy.
KICK (INTENSITY)—8
For whatever reason, I did find the kick of this one to be a bit less intense than the previous two.  That’s not to say it was weak—it was still impressive.  I imagine my experience was influenced by the fact that I wasn't feeling too well (head cold) at the time of drinking it, so take my input here with a grain of salt.
KICK (DURATION)—9
Not especially different from the other two; what it delivered lasted a good while.
THE DRINK OVERALL—8.33
Though it’s not quite as strong as the other two, I have no reason not to recommend Full Throttle—Red Berry, especially considering the fact that it’s the only one of the line that actually tastes good.  I’m going to give it the benefit of the doubt and call it no different than the other two in terms of effectiveness, and recommend giving it a shot.