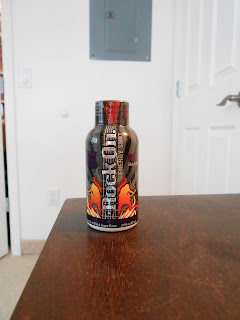 Intriguing, and in that respect deceptive.  In previous reviews, I’ve mentioned that I find these shots attractive, and the effort that went into the packaging seems to translates in one’s mind as effort in flavor/energy—which has turned out not to be the case.  These are kind of like the anglerfish’s lure—they lull you in, but only to get chomped in the end.

Definitely less harsh with ice than without.  It’s still somewhat bitter and not especially pleasant, but the grape flavor is a little cleaner and more perceptible, and the sensation that I was gagging this stuff down was greatly diminished.

Sucks, sucks, sucks, sucks.  In terms of efficacy, these are some of the worst I’ve had, second only to that ‘Up to 10 Hour’ garbage I picked up from the local grocer’s.  In contrast with the latter shots, however, which make you feel angry and agitated and render you all but useless, at least it can be said of these that they are merely weak, delivering only enough of a boost to keep your feet from dragging from point A to point B.

Lasted all of two hours, but as weak as the boost was to begin with, it might as well have been 15 minutes.