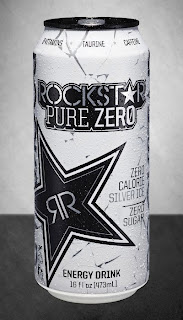 EASE IN ACQUISITION—6 (I think)

This is another one that just kind of snuck up on me—hadn’t so much as heard of it until I stopped by the gas station and saw these on display up front.  Grabbed them up quick (I like reviewing the new drinks ASAP), but before long I think they’ll be pretty abundant.

One thing I have to say about these is that they look sharp—the stark black and the white and cracked ice motif in the background see to that.  The only area in which I’m tempted to take points off is more a nitpicky thing than anything else, but—the tiny bumps on the can get to me.  Now, this isn’t an aesthetic or functional concern; they don’t take away from the look of the can and they don’t make it uncomfortable to hold, but they did serve to amplify my suspicions that this was going to be a Monster Energy—Zero Ultra knockoff.  Now, I had these same reservations before reviewing Rockstar Recovery—Energy/Tea/Lemonade (which appeared to be a Monster Rehab—Lemonade knockoff), but that one blew me out of the water, and truthfully did the same thing to Monster Rehab in my book—more than anything else because it was like Monster’s version on freaking steroids.  I don’t have the same hopes here—the caffeine content is the standard 160 mg, which is about the same as Monster’s original idea, and I think the best that Rockstar could hope for here is to match Monster in terms of quality.  It’s really kind of sad that Rockstar feels they have to resort to this, but I think I may understand where they are coming from—most of their original ideas as of late (Super Sours and Punched—Blue Raspberry) haven’t been all that great.

Pouring this out into a glass of ice, I can see and smell similarities to Zero Ultra—same cloudy white liquid, same muted citrus aroma.  Taking a taste, I can taste similarities as well—but just similarities.  This isn’t a clone per se (which I find kind of relieving), it’s more like Rockstar took Monster’s idea to the drawing board, honestly tried to improve upon it, and then started distributing it.  It really is a great deal less lazy than I initially supposed it would be; rather than copying Monster’s most successful moves Rockstar is matching them blow for blow and making beverages that could amount to some serious competition for Monster.  Now, after all that, I suppose I should tell you how it tastes—it’s got the same sweet and mellow grapefruit favor profile as Zero Ultra, but there’s another flavor there, a strong and sour lemon flavor, that really complements and balances out the smoother grapefruit with which it shares the palate.  All in all, it’s a fairly pleasing experience—not identical to Zero Ultra, and not superior, but an equal, an excellent drink in and of itself.

As far as intensity is concerned, you know what to expect if you’re into drinking Rockstars.  This will supply an above-average boost, and I found it to be more than intense enough for things like studying and driving and watching kids for hours on end.  I drank this before the gym and while I can say that I appreciated the boost, I vastly prefer NOS Active for this purpose—this really isn’t the drink for that sort of thing.  Now, Xdurance is a completely different story…but read my review if you want the skinny on that.

Three and a half hours of decent energy—no crash.

I can honestly say that I appreciated Rockstar’s effort in creating this drink.  It’s not a terribly original idea, and I would love for Rockstar to focus on putting something out of this caliber without looking to Monster for ideas, but it’s been tweaked enough that this truly is Rockstar’s drink, and I think that open-minded (read: not diehards who have been drinking it every day since it came out) Zero Ultra fans and just about everyone else will find this to be more than satisfactory.  Heck, they might even like it more than the original.  Try it out and let me know—I’ll be interested in seeing the public concensus.