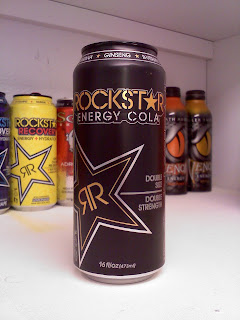 EASE IN ACQUISITION—7
Rockstar Energy Cola is available, though not so much as a great deal of the products they offer.  Still, it can’t be said that it’s difficult to track down, but you’ll still have to look a bit.
APPEARANCE/PRESENTATION—10
Although the same format as the original is used on their energy cola, certain changes have been made that make a world of difference for the better.  A blacker, more convincing gold color is used for the logo and as an accent throughout, only highlighting the key points of the design over the new black background, which has a smooth satin look and feel to it.  Silver lettering and outlining is used elsewhere with exceptional results.  There’s no other way to put this—the thing looks sexy.  It’s the kind of stuff you’d expect to pick up at a nice party or somewhere like that, somewhere where they spare no expense in offering the best of what they’ve got.
TASTE—10
By and large, I’m not a real cola guy, but if more tasted like Rockstar Energy Cola, I definitely would be.  Where most colas taste either like a cheap Coke rip-off or like Robitussin, Rockstar Energy Cola delivers a fresh, crisp, exceptionally clean taste that I had no troubles downing in a jiffy.
KICK (INTENSITY)—10
The kick is blessedly similar, even identical, to the original—hits fast and hard.  You get about as much as you could ask for in an energy drink, and then some.
KICK (DURATION)—10
Again, like the original, the kick stays with you.  I drank it at about 6:00 P.M., and even once 11:30 P.M. rolled, I was lying in bed and unable to get myself to fall asleep.  I love this sort of staying power in an energy drink, but I’d definitely advise drinking it earlier in the day to avoid the sleeplessness.
THE DRINK OVERALL—10
Well, once again, Rockstar has exceeded just about any expectation that could be made and produced a drink that positively kicks butt.  It is every bit equal to the original in terms of the kick, and has a taste of it’s own that demands other drinks in its class to step up to the plate and just try to match it.  As Monster Energy—Import sets a new standard for the traditional energy drink flavor, Rockstar Energy Cola has set a new standard for the cola taste, one which others will be hard-pressed to match.