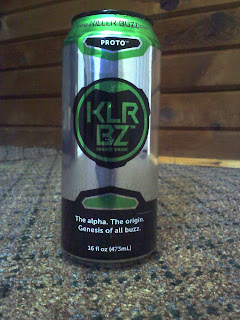 Only place I’ve seen this is online.  Hopefully I’ll be seeing it stocked nearby soon.

All-in-all, I think that the look of Klr Bz—Proto is a success, and is a definite improvement over the semi-generic looking first generation drink.  I like the geometric nature of the design, I wholeheartedly approve of the color combination employed (even with the aluminum it looks nice), and enjoy how these elements work together to give the can an appropriate insectoid appearance.  There is one thing, however, that I’d like to see featured a little more prominently, and that’s what it is that makes the drink unique—the ‘Giant Hornet Amino Acid.’

From the website: “GHAA, Giant Hornet Amino Acid, is a synthetic version of the secretion of the larvae of the Giant Asian Hornet. This secretion contains 17 amino acids that metabolize the fat stored in the hornet’s abdomen and turns it into energy, allowing it to fly up to 60 miles in a single day at speeds of up to 25 miles per hour—thus providing SUSTAINED ENERGY.”

See, this is cool.  No other drink in the world can say they have integrated a specific amino acid combination employed by a species of frickin’ big, frickin’ energetic Asian hornet so that we, also, might enjoy a similar energy experience as said hornets enjoy.  Alas, this characteristic doesn’t get much attention on the can.  It can be seen written on the topmost band on the left side of the can, and to the right of the ingredients a short blurb on it can be found written in miniscule font.  There is much that the drink can do with this fact, but compared with the potential, very little is actually done.  I suppose, however, that’s why I’m here—to fill in the blanks, assuming that the energy drink in question deserves said filling.

The taste of the drink is the traditional energy drink flavor, also known colloquially as ‘Red Bull clone.’  Wait…before you skip this section and move on to the kick, this one’s different—yeah, it’s got a familiar flavor profile, but I honestly did not feel that I was drinking the same thing that I had several times before.  See, the flavor’s done with a twist—in addition to the familiar taste, front and center, you get a texture that’s unique to the drink—I’d call it a smoothness.  My guess that it’s from the GHAA, but who knows?  All I really know is that I found the drink to be very pleasant, and is something I’d definitely go with over a Monster or Wired or Red Bull (especially over a Red Bull) any day.

So…given everything I’ve said about the GHAA, the question on everyone’s mind is probably the following: how does it work?  Well, as far as intensity is concerned, I found it to be quite satisfactory.  I had slept rather fitfully the night before, and even after my morning run (which usually perks me right up) I was pretty exhausted.  Drank this (slowly, so as to savor it) and it woke me right up.  However, it wasn’t something I experienced as a harsh, jitter-filled blast of caffeine, rather, it was more of a smooth experience.  I was very awake, very alert, and very functional—in short, ready to tackle the day ahead.

After reaching a peak, most drinks tend to taper off at a relatively steady rate, often culminating in a crash.  However, Klr Bz—Proto deviated from that norm in two ways: first of all, the energy peak wasn’t exactly a peak—it was more of a plateau.  That lasted about 4½ hours, followed by a very steady, hour-long wearing-off period, after which there was a remarkable lack of crash.  I’d go far as to say that even though I could have slept, I was definitely less tired than I felt before I drank it.

I drink plenty of energy drinks, and it’s really not very often I experience something new and different enough to really get excited about.  This, however, is one of those moments.  I’d go so far as to say I loved this drink—I loved the different take on a common flavor, I loved the functionality of the kick, I loved how dang long it lasted, and I loved that I not only did not crash, but felt better during the aftermath than I did before I drank it.  Do what you can to get your hands on a can of this and let me know what you think.  Will be interested in knowing if the GHAA did as much for others as it did for me.