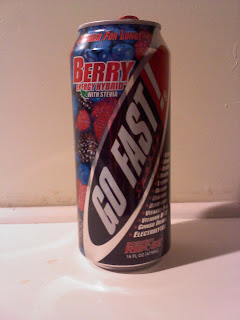 As a general rule, I’ve found Go Fast products pretty hard to track down, and this one is no exception—it seems to have an affinity for obscure locations.  This, of course, will vary depending on where you live, but seems to be the case everywhere I’ve been.

The presentation really isn’t anything special—diagonal logo, image of mixed berries to one side.  About what you’d expect out of a berry-flavored beverage.

On it’s own, the berry taste isn’t bad.  It’s a decent blend of sweet and tart with a respectably convincing flavor, so at the very least, it’s not a bad effort.  Things go way south as soon you realize that stevia was involved in the making of the beverage.  If you’ve read my stevia rants before (featured in my reviews for Golazo and both Jamba energy drinks), I apologize for repeating myself, but do so for the benefit of those who have not.  To all who are unfamiliar with it, stevia is a natural sweetener from the plant Stevia rebaudina.  It is marketed as a nautral alternative the multitude of other synthetic sweeteners out there, and, being aglycemic, also holds added appeal to diabetics and hypoglycemics.  It is, however, exceptionally potent, and carries with it a very sharp, ugly aftertaste that many who try it would just as soon forget but just can’t.  It is at best unnecessary, especially in a drink already sweetened with sugar and honey (like this one), and is at worst disfiguring to an otherwise acceptable flavor (as happens here).

It’s not as hard-hitting as the original, but still passable if it’s all you’ve got to work with (which, let’s face it, probably won’t happen).  “Average” is a good word to use here.

Though the drink was merely standard in terms of intensity, I found Go Fast Berry Energy Hybrid to be a notch above average in terms of how long it lasted, enough to earn commendation at least in that regard.

Even if I have to admit that the kick’s alright, it’s not by any means worth the flavor.  If you’re not bothered by the stevia, then it might be worth a shot, but as for myself, it’s not an experience I have any intention of repeating.