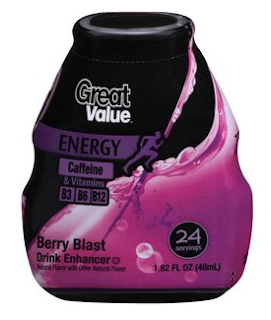 At every Wal-Mart I’ve been to thus far.

Full marks for being handy; point knocked off simply because Mio looks better.  Another thought: why the heck are half of all berry energy products (or otherwise) “berry blast?”

Flavor is reasonably pleasant—you’ve got your blueberries, your strawberries, your raspberries, etc.  It’s all a berry lover could ask for in a drink enhancer.  One word of warning, though; this is not especially forgiving when it comes to the water:additive ratio—one bit too much water and it’s bland, one bit to little and it tastes like you’re drinking the concentrate straight out of the bottle.

Same story here as either of the other Great Value Energy water enhancers—they perform about as well as Mio in smaller doses, but as you go up the differences between the two become exaggerated, and soon you’re using two glasses to get the same rush from Great Value that you could have gotten from one glass of Mio.  Significant doses:

Two servings (1 teaspoon) will administer 100 mg of caffeine; which should be enough to get you through most day-to-day stuff. 7/10

Three servings (1½ teaspoons) will give you 150 mg of caffeine—and a bit less energy than the same amount of Mio; think about what you’d get from most Monster beverages.  8/10

Four servings (2 teaspoons) will give you 200 mg of caffeine, and through that a thorough boost that will get you through most standard energy-requiring situations. 8.5/10

Add a couple more servings to that and you get into the really high-intensity territory—and the high water consumption territory, which often leads to you wandering to bathroom territories.

Overall, this is a decent product.  Still not as enthused as I was with Mio Energy—Black Cherry, but I’ve got one more flavor to review.  We’ll see where that leads.