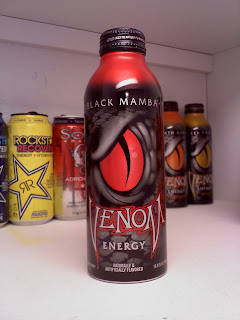 Very hit-and-miss in terms of where you can and where you can’t.  The company (Dr. Pepper) seems to ship it in clusters; I’ll see it everywhere in one town, and then leave and not seem to be able to find it anywhere else.

Venom Energy—Black Mamba (or any of the Venom Energy line, for that matter) looks tight—it’s the new standard of awesome when it comes to energy drink can designs.  Rather than the standard 16-oz can, this stuff comes in a thick aluminum bottle, with the design enameled on rather than simply…I don’t know, printed?  Front and center you have a blood-red snake's eye, with narrow pupils and all.  This packaging strategy, more than any other, earns the attention it gets rather than simply screaming for it.

The way this drink was packaged, you would think that there would be something new and remarkable inside, but from the start, it’s virtually exactly like the original Monster Energy drink or any of the other multitudinous energy drinks that taste exactly like it.  Why do I not take points of for being so unoriginal, as I am sometimes inclined to do?  It’s the fizz…yes, the fizz.  I don’t know what they did to achieve this, but this drink is way more carbonated than most energy drinks I’ve encountered, so that it almost seems like a new take on the flavor.

The kick is acceptable—not exceptionally intense, but certainly strong enough to do the job.  I found myself in a place just south of jittery, but north of simply awake.  I think "alert" would be the best word to use.

Even if it’s not especially remarkable in terms of how hard it hits you, Venom Energy—Black Mamba will last about as long as you could ask for.

Despite the derivative origins of its flavor, Venom Energy—Black Mamba still manages to stand out in my mind among its hosts of competitors.  The distinct fizz is a definite plus if you’re sick of the "clone" part Red Bull clone trend, and it manages to deliver a better kick than similar and more mainstream drinks, such as Red Bull and Monster Energy.  Even if it isn’t the best, Venom Energy—Black Mamba still well worth a shot.