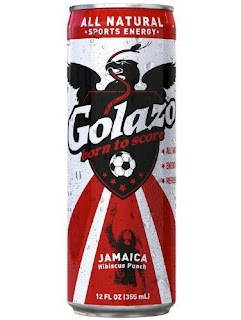 When I was in Guatemala, I found and fell in love with a beverage called rosa de Jamaica tea—in Enlish, known as hibiscus tea.  Tart and slightly fruity, it was the sort of thing that I would brew up a quart of when I came home every evening and down before bed—even though it meant waking up for urgent trips to the bathroom in the middle of the night.

Recently, I learned that Golazo had expanded their line to include two new beverages—Golazo Mandarina and Golazo Jamaica.  Now, for those of you that have not read my review for Golazo, I was pretty put off by the flavor—mostly because of the perverse overuse of the natural sweetener stevia.  You can understand, then, the considerable conflict of emotions I felt when I learned of Golazo Jamaica—on one hand, I felt elation at the fact that one of my favorite beverages of all time was going to be made into an energy drink, though on the other, I felt dread at the fact that my beloved rosa de Jamaica was going to be combined with stevia.

Of course, regardless of how it turned out, I knew I needed to get my hands on these new Golazo beverages.  Now, let’s see if Golazo Jamaica lives up to the hibiscus legacy….

As long as you live in Washington State, this stuff just about everywhere.  But, if you live in one of the other 49 states in the Union or outside of the United States…I’d say you’re probably out of luck.

Golazo Jamaica sets the bar pretty high for itself in a number of ways, the first of which is brought about just by calling itself Golazo (for those of you who are not Spanish speakers, the term ‘golazo’ refers to the scoring of a goal in a fashion that is exceptionally impressive).  In addition, it graces its can with an awesome slogan (“Born to Score”), a triumphant soccer dude, and a bold, eye-catching design—the last of which is actually graced with a decent color combination this time around.  As always, Golazo has made me excited to try one of their drinks—and now we get to see if they live up to the standard they’ve set for themselves….

It is with a heavy heart indeed that I report that Golazo Jamaica isn’t all that great.  First thing you taste is a vague generic fruit punch flavor—clean and convincing, granted, but still not very good.  There are…nuances of hibiscus in there, but the stevia overpowers it before I had time to actually appreciate it.   In retrospect, I should have figured when I saw the words “Hibiscus Punch” on the can and stevia in the ingredients list that this is what was coming.

Notwithstanding the letdown of the flavor, I can’t help but be enthused over the kick—I would gladly drink a better-tasting beverage on a daily basis to get this high level of energy and moderate level of jitters.  I have to mention (again) that this drink only has 100 mg of caffeine—which makes the high efficacy all the more awesome.

Impressive, given (once again) the moderate caffeine content.  100 mg for three and a half hours of energy?  Sweet!

This is one of those instances in which I’m going to defer a final judgment to the reader—I really wasn’t fond of the flavor, but I loved how it kicked.  If you don’t mind stevia and don’t mind fruit punch, buy a Golazo Jamaica—this is one of those drinks I’d really love to love, and if I can’t, then someone else might as well.