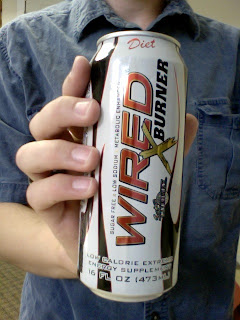 By and large, I have a pretty dismissive attitude towards the Wired line as a whole.  Short of Wired Sugar Free, which actually managed to taste pretty good, and Wired X 344, which gave me an insane caffeine boost, none of the drinks have managed to make a lasting impression on my mind.

The typical excitement of finding a new energy drink at a gas station I was checking out was greatly diminished by the fact that that new drink was a Wired beverage—specifically, Wired X Diet Burner.  Given that no flavor was given on the can, I figured this was one of their choose-your-own-Red-Bull-clone drinks—and it turns out I was right.  In addition to supplying (cue dramatic music here) one milligram of caffeine more than the original, the proprietary blend had also been tweaked slightly to include (among other things) Super Citrimax, which is supposed to suppress the appetite to some degree—so I think it’s safe to say that the idea of Wired X Diet Burner is to burn calories.  Supposedly, a sugared version existed at some point—though how that jives with the idea of burning calories, I’m not sure.  In any case, on with the review.

Turns out that this is a discontinued product—nothing on the drink exists on the Wired website, and reviews I found for it were written a few years back.  In short, if you’re looking for a Red Bull clone that doubles as an appetite suppressant, you’re out of luck.

I’m giving Wired X Diet Burner a positive score mostly because of the color scheme—I liked the black flames on the white background, and I liked the bronze X with the red “Wired”.  The layout leaves something to be desired, but I’m willing to look over it in this instance.

As anticipated, this is a Red Bull clone—and one I didn’t particularly enjoy.  The flavor’s there, but the texture is really thick and heavy, almost syrupy.  It’s not bad enough to augment Super Citrimax’s appetite suppressing effects, but it certainly doesn’t hurt.

I did notice a difference between the kick supplied by the original Wired and that delivered by Wired X Diet Burner—not a huge difference, but a difference nonetheless.  In addition to the average degree of awakedness the drink supplied, I did notice some slight jitters—enough to award an extra half point for intensity.

It seems I got about two hours, 45 minutes of energy before reaching the finishing point.  Didn’t notice a crash.

Even though I think Wired had a good thing going in an appetite-suppressing Red Bull clone, the execution is such that I’m not going to lose any sleep over Wired X Diet Burner’s discontinuation.  I would advise you not to, either.