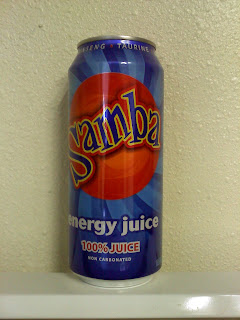 Energyfiend.com states that Rumba Energy Juice (orange and blue can) has 170 mg of caffeine, so I'm guessing that the same is true for Samba.

Got this for 25 cents at an outlet store in Twin Falls, along with both Rumba and Tango energy juices.  To wind up at such a place, I imagine it had been stocked somewhere else at some point, but I haven’t been able to find it.

I have the same tiff with this as I did with Tango Energy Juice—this does not look like an energy drink.  It looks like a kid’s fruit juice drink, and having a two-year-old, these sorts of things make me nervous.  If you’re going to make an energy drink, package it like a freaking energy drink, or at least do something to make it distinguishable from Capri Sun or Juicy Juice and the like so some dumb parent doesn’t buy it for their elementary school kid and kill them.

Tango Energy Juice looked like it should taste like grape, and it tasted like grape-ish apple juice.  Tango looks like it should be cranberry or something like that, and it tastes mostly like cranberry-ish apple juice.  My own personal aversion to apple juice aside (long story), if you’re going to make a fruit juice that’s obviously supposed to have a particular taste in particular, make sure it tastes like that, rather than your run-of-the-mill fruit juice filler.

Kick’s average.  Wakes you up, but isn’t anything to really write home over.

Also average—you get 3 hours or so before it’s over.

For 25 cents, I wasn’t expecting anything especially spectacular, and Samba Energy Juice isn’t.  It’s for people who like 100% juice (which, I will admit, is unique and kind of nifty) and who also like energy.  If this sounds like you, get online and order a case.  Otherwise…don’t.