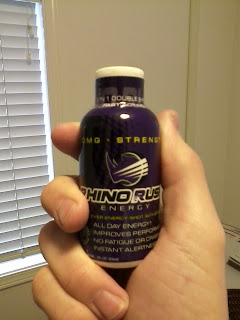 Recently, I’ve been seeing this shot pop up a lot here in Rexburg.  I’ve held off on buying it for a while, mostly because the cheapest I’ve been able to find it has been $5.25—more than I’ve ever spent on a single energy product.  With the price has come an intrigue, however—I would really like to know if this product has anything going for it that warrants the price, or if it’s just a product of another company’s bloated ego.  If it really is worth the cash I forked out for it, you can expect me to be really excited about it.  If not…then you can expect me to be really angry.  Either way, this will be an interesting review.

Got mixed feelings on this.  On one hand, it’s reasonably effective in drawing the eye—I like the dark colors, I like the background pattern, I like the logo and rhinoceros logo in the foreground; for some reason, all these seem to have a way of making me feel like the 2 oz. bottle was a little stouter than it actually was.  On the other hand, close inspection reveals probably the lamest, least applicable slogan I’ve ever seen on an energy product: “OMG Strength.”  Tell me something—does this look like the sort of product whose clientele are going to be wowed by valley girl-esque slogans like that?

This is definitely different than most grape shots, that’s for sure.  Its flavor is more thick and convincing and less Triaminic-y, but it still has its drawbacks.  It has a medicinal aftertaste that’s very different than most shots, one that’s kind of earthy and herbal (I’m attributing that to the ephedra extract that’s in here); and furthermore, it’s pretty sour—enough to make me pucker, which usually doesn’t happen.  I’d call it more enjoyable than most grape shots, but still…you won’t be drinking this for the flavor (though at $5.25 they should be able to afford to make it decent).

And now—the moment of truth.  Does Rhino Rush, with its caffeine, ephedra, and yohimbe deliver the goods?  Short answer is yes—this is a really excellent boost, putting me right at the peak of functionality after a really short night’s sleep (which I needed right before my organic chemistry final).  I don’t know that I’d be willing to pay as much as I did to experience it again, but I have to say it is very respectable.

That peak of functionality lasted me a good five hours before it began to wear off, tapering gradually over the course of an hour before I felt like I could use a nap.

As far as functionality is concerned, Rhino Rush is indeed an excellent shot.  As far as value is concerned, however, I’m not sold on it.  Ephedra is supposed to be good for all sorts of things, but from what I understand, a lot of what is alleged it is supposed to come after extended use (increased metabolism and all that).  I’m not really willing to use Rhion Rush long term to get the alleged effects of ephedra extract, so in the end, this is just a good but overpriced shot.