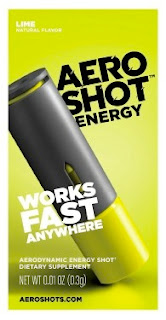 Scarce, but you can probably find somewhere that sells it if you look hard enough.  Given my flavor experiences with the three products, I anticipate they’ll be showing up at Big Lots soon enough.

For those of you that have read either of my previous reviews of an Aeroshot product (Green Apple and Raspberry), go ahead and skip to the flavor section; I’m just going to copy and paste my thoughts from the original review here—no point in trying to find a way to say it all over again.

Aesthetically, this is quite drab.  The only reason it catches your attention is for the image of the unique administration inhaler thing on front, but it’s not enough to keep your interest after seeing the $2.99 price tag, and you move on—unless, of course, you happen to have entered into the gas station with a sibling who, having heard that these are really bad, is more than willing to fund the review of all three flavors.

As far as function is concerned, this is an absolute disaster.  I assume the idea behind going the weird powder inhaler thingy route is convenience/ease of administration, but…it’s neither convenient nor easy.  Opening it’s a cinch, but from there it’s not like you can dump it out in your mouth or anything—you’re supposed to “Draw [it] into your mouth”—which basically means trying to suck it in just using the power of your cheeks, all the while trying to keep from aspirating it—which isn’t as easy as it sounds.  To top it off, it took me a couple of minutes to get it all out (spurt by spurt), so even if you manage to not inhale it, it takes you so long that you might as well go with an energy drink or shot (as soon as I find one that I really like, I’ll let you know)—heck, downing a BFC Monster is more convenient than this.

Bottom line is the idea’s a complete bust.  Better make a powder that you can mix into water or a shot or something like that—but this was just terrible.

My first experience with an Aeroshot product (Green Apple) was the worst—it’s been a long time since I’ve had trouble keeping something down like that.  My second experience (Raspberry) was better, but still in and of itself pretty disgusting.  Now, when attempting to describe my third experience with its hardly-perceptible lime flavor, the first thing that comes to mind is “fiendishly bad”—not so gut wrenching as my first but neither as bearable as my second.

In sharp contrast with the flavor, the energy boost is quite excellent, delivering a superb level of alertness and making me feel only moderately jittery.

Aeroshot Energy—Lime is as bad as any in the lot—it’s hard to use, very disgusting, and overpriced to boot.  Yes, I enjoyed the energy boost it gave me, but I know of several products that can deliver similarly in that sense, with a number of them being quite palpable and selling for about half the price of one of these (the Monster Rehab line, for example).  While I can see the appeal in the concept behind the products, it seems to me that this is a line doomed to sit en masse on the shelves of Big Lots for 60 cents a piece, probably to linger for quite a while once folks figure out just how bad they taste….