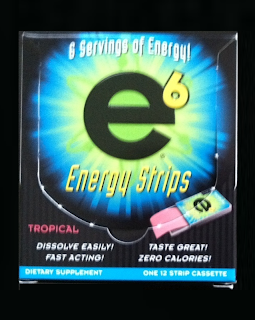 I think “overpackaged” is a good word here; I wish they’d stuck the strips in envelopes (Sheets style) and left it at that, rather than go the three layer route before we can get to the strips.

Not really wild about this one—it’s got the same leathery texture and harsh taste as the cinnamon-flavored strips, but unlike the latter there’s no agreeable aftertaste to redeem the initial experience; I could taste that they were at least trying to go the tropical route, but in the end it wasn’t convincing or agreeable enough to be enjoyable.

The standard serving doesn’t convey a lot by way of energy, though I did find myself popping in two sheets before I exercised while the cassette lasted.  It’s good for a boost, but you’re probably going to have to really load up on them if you want to stay awake.

Two and a half hours, no crash.

I wasn’t wild about these; even if you like energy strips you’re better going off with the cinnamon flavor.  If you can get these on sale, I suppose they are alright when it comes to cheap, portable energy—though Mio Energy—Black Cherry is still my favorite in that regard.