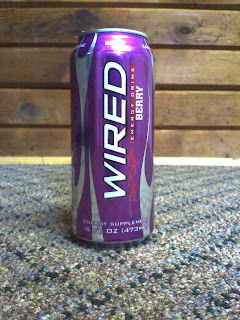 About as common as the original.  Can be found fairly easily if you know where to look, otherwise…gets to be a bit challenging.

I think this is the first time I haven’t been enthralled, or at least have been critical, of an energy drink packaged in purple.  See, purple has an almost limitless potential to make things look cool—see what it does for the likes of NOS Grape, Monster Energy—Mixxd and Rockstar Juiced—Guava.  The difference between these and Wired Berry is the fact that the purple really has nothing to work with on the latter—I’ve always considered the Wired motif to look a bit cheesy, and there’s very little the purple can do to help it.

Don’t look for anything recognizably berry in Wired Berry—just expect a vague, fake flavor that may pass to some palates as being berry flavored.  So far, I’m not impressed….

Wired Berry does’t get any less ordinary when it comes to kick—it’s an average boost, the same kind you can get out of hosts of others.  In the interest of being descriptive, I’ll describe it as being an appreciable increase in alertness without any jitters.

Passable, if unremarkable.  2½ hours passed before it became apparent that the caffeine had worn off.

When it comes right down to it, Wired Berry is pretty dang ordinary.  If this sort of description does not turn you off, then by all means go ahead and buy a can.  Unfortunately, I experienced nothing drinking it that’s going to have me coming back for more.