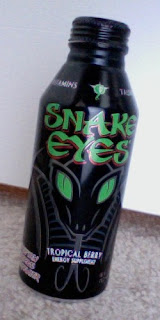 Found at Holiday Station stores—which have locations in Alaska, Idaho (just two, way the heck up there in northern Idaho), Michigan, Minnesota, Montana, North Dakota, South Dakota, Washington, Wisconsin, and Wyoming—really random distribution, if you ask me.  If you live in one of those states near a Holiday Station store, chances are you’ve seen this energy drink already.  If not—then you’re probably in the same boat as me, and will have to ask around to get your hands on some (not that I think it’s actually worth the effort)

It’s…so…friggin’…CHEESY!  Seriously, even for a store brand this is bad, and I’ve seen some pretty bad designs in my day.  The logo is ridiculous, the snake graphic laughable (take a look at any Venom Energy product to see the snake theme done right and you’ll see what I mean), and even the overall look suffers from a painfully generic appearance.  The only points I give are for this size and shape of bottle, which I am quite fond of (sits nice and easy in the hand), and the use of black here.  I know that last bit sounds weird—after all, how many drinks employ the glossy black look?  I don’t know how to explain it, but here, it’s glossy black done right—if it can be used to the effect of softening my angry feelings towards the Snake Eyes look, then I call its use successful.  Maybe it’s the combination of the glossy black and this nice bottle shape….

Yech.  I don’t know where Holiday Station gets off calling this “Tropical Berry”—it doesn’t taste tropical and it sure as heck doesn’t taste like berries.  My guess is that this drink originated when someone in the R&D department decided to take two random flavored syrups (whose manufacturers obviously took no care to make it convincing or agreeable) concocted from two amalgamations of different flavors—my guess is ‘tropical fruit’ and ‘mixed berry’—throw them together, and combine the names of the syrups to give the drink its own name: ‘tropical fruit’ + ‘mixed berry’ = ‘tropical berry.’  In any case, the result is a flop—it doesn’t taste like anything recognizable (in contrast to the zero calorie version of this beverage—wait until I get to that review!), and on to of that is so thick, syrupy and sweet that it almost makes you sick to your stomach.  For the flavor alone I would avoid it….

…But on top of its tasting bad, it delivers hardly any energy—just enough make you feel a little less tired.  Certainly not potent enough to proffer you any sort of increase in functionality.

Toting as much sugar as this does, I would expect a crash once the end rolled around after two and a half hours, but truthfully, I don’t know—I make it a point not to drink anything sugary except right before the gym so I can burn the calories off during my cardio time, and after the fact I notice that I don’t typically crash.  In any event, two and a half hours of mediocre energy is not nearly enough of a perk to have to slarg down that sugary, ambiguous semi-liquid.

The bottom line here, as with its “citrus” counterpart (we’ll address the “citrus” issue in my review of the sugar-free versions of these beverages), is that this is an overall bad energy beverage—one that you had best avoid.  It doesn’t taste good, and its kick is weak enough as to greatly limit its utility.  Even at Holiday Station stores, there are better energy drinks.  Grab a Monster Rehab or a Rockstar Zero Carb or something like that.  You’re way better off.