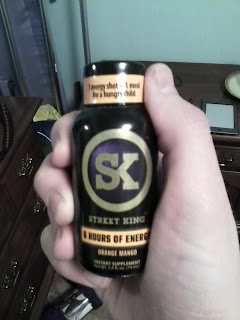 Not as common as it could be; I find it becomes more common once I get out on the interstate and start making stops every few hours or so.

As does the packaging for the grape variety, Street King—Orange Mango’s packaging works relatively well.  The bottle is nice and solid and the orange and gold design bold and appealing especially over the dark background.  As with the purple-themed shot, I found that the solid background could have been replaced with a texture for a desirable effect; in this case carbon fiber would have served it well.

As with my previous Street King shot, I had high hopes for this one, and when I opened the bottle and took a whiff, I thought my faith would be rewarded—actually smelled a good deal like mangos.  The first sip tasted like peach rings (which I like), but the shot eventually lost this characteristic and became quite acrid and unpleasant.  Dang it.

As with the grape version you can expect a fairly reasonable boost of energy without jitters—and it was a pleasant enough experience that I think it will appeal to shot lovers everywhere.

So once again, a Street King shot has proved itself to be more agreeable than its counterparts, but still far less than what I’m looking for in a shot.  Energy shot aficionados will absolutely want to try it out if they have not already, but as for myself, unless I find a shot that really impresses soon, I think I will be finishing up what I have in my reserves and really cut back on reviewing them—I’m really sick and tired of mediocre and bad-tasting shots.

Remember, by the way, that for every one of these shots sold, the company donates a quarter towards the United Nations World Food Programme, which provides an entire meal for a hungry child.  If you’re looking to donate more, follow the link below: