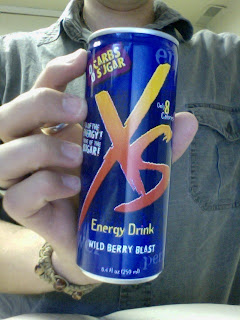 This can was a gift from my brother, who in turn had received it from a friend of his.  I’m not sure where they found it, and I haven’t seen it anywhere I’ve been, so we’ll call it “very difficult to find.”

XS has a fairly basic layout—logo in the foreground, monochromatic background.  In this respect it somewhat reminds me of NOS, though without the boldness of the latter.

XS—Wild Berry Blast tastes like it’s trying to be a Rockstar Zero Carb—the flavor profile is there, but not nearly as well executed.  In terms of the flavor itself it tastes a little more on the sour side than I would prefer, and when you get the sweetness, it’s heavily influenced by unintended aftertastes of the artificial sweeteners.

Intensity is reasonable, given the caffeine content.  The pick-up is alright, the low level of jitters satisfactory—though neither are strong enough to be considered “excess.”

Relatively proportional to the intensity—it seems I got at least two and a half out of it.

XS—Wild Berry Blast left me feeling a little underwhelmed—it’s basically a low-end, low-caffeine variant of Rockstar Zero Carb.  Do yourself a favor and stick with Rockstar’s take—it tastes better, works better, and, to top it all off, you can actually find it.