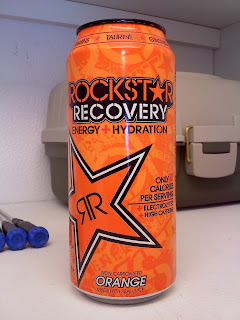 This stuff was fairly uncommon when it first came out, but not long after it completely inundated the market.  Don’t expect to look long or hard. 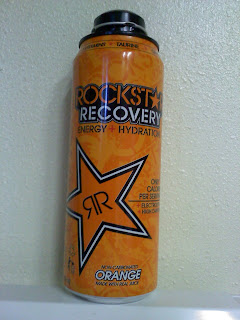 The drink comes in a can that follows the typical Rockstar motif, with the logo and the background, the difference being the principal color scheme, which centers around two shades of orange and some white lettering with lots of black accenting.  The look is an overall success.

Tastes like Tang, and I like Tang.  What’s really impressive about the flavor, however, is the fact that there are only 20 calories per can, yet it does not taste watered down (as does Rockstar Recovery—Grape) or have any hints of artificial sweetening to mar the experience (contrast with Rockstar Pink).  This makes the success of the flavor all the more impressive.  Word to the wise: makes sure you drink it cold.  I had the 24 oz. can when it was only somewhat chilled and my feelings weren’t so positive.

The drink was slow at getting started, and I was almost ready to dismiss the kick as average before it really hit—and let me tell you, this is some pretty hardcore stuff, much after the tradition of the original.  Between the original Rockstar and Rockstar Energy Cola, I would say that this is one of the strongest Rockstar prudicts on the market—I have not been so affected by a drink in a very long time, perhaps only two or three times since I started drinking energy drinks a couple of years ago.  There was nothing to do at that point but study for my anatomy test with exceeding efficiency, and listen to “Battlefield” by Blind Guardian over and over (a total of at least 20 times…seemed appropriate).

This drink really went into uncharted territory in terms of duration—the peak of effectiveness lasted for an hour and a half to two hours before it started to wear, off, and even then, it wore off VERY slowly, taking an additional four hours to get back to the point where I didn’t feel any effects.  And, wonder of wonders, there was no crash at the end to set me back.

While I can’t vouch for the hydration claim (the drink had a very significant diuretic effect), I can say that this is hands-down one of the most effective energy drinks I’ve ever had.  I really can’t find anything bad to say about it.  All I can say is that this drink rocks, and should be a first choice for anyone who really needs to get their hands on a serious energy drink.  Well done, Rockstar.  Well done….

I consumed the 24 oz. can under different circumstances than the 16 oz. can—with the latter, I was studying for an anatomy test, and with the former, I needed a boost to get me ready for work.  Needless to say, it’s pretty hard to compare the two—the 16 oz. can had me vibrating out of my seat because I was so freakin’ wired, and the 24 oz. can had me bouncing around the vet clinic where I work for the same reason.  As I recall, the perceived energy levels were more or less the same, but that is probably because it was easier for me to notice the effects when I was sitting and studying than when I was up and running.  Call the 24 oz. stronger, just because it managed to deliver the same formidable energy when I was moving around as the 16 oz. when I was sitting.

Again, what I perceived after drinking the 24 oz. can was about the same as after I drank the 16 oz. can (5-5½ hours), but as I was up and running, I find it a little more impressive that the drink was still able to deliver so well.

If you’ve had the 16 oz. can and liked it, you can plan on liking the 24 oz. can—I was extremely impressed with the former, and the latter was not too shabby, either.  Either will work; which you choose is up to whether you are fond of the flavor.