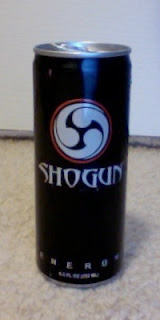 I came to possess a can of Shogun Energy through the contribution of Big Red Boots, the man behind the energy review site possessedbycaffeine.com (a personal favorite of mine); were it not so I doubt I would have the chance to review it—it has been discontinued for a couple of years now, if I’m not mistaken.

Shogun is a perfect example of how less is often more—all you get here is a black background with the ninja star/spiral/something and the logo, but it’s really all the can needs to look bold and sharp.

It’s no surprise, I suppose, that Shogun went down in flames—as inundated as the market is, most companies just can’t just toss another Red Bull clone into the mix and hope to survive.  I’ll admit, this is one of the better ones I’ve had recently—mild and generally well balanced, without a hint of syrupiness—but it’s just not good enough to compete with the original.  Come to think of it, I can only think of one clone that really can.

Doesn’t help Shogun’s case that you hardly feel any kick from this, either—it’s not nearly enough to be able to do anything useful, and certainly left me feeling snubbed.

Not only is it not strong enough to be especially useful, but on top of that you won’t be not especially useful for long before you crash back down to useless—does that make sense?  An hour and a half of mediocre energy is far from impressive.

Well…Shogun’s gone, and I suppose its just as well.  The world gained nothing in the addition of another uninspired, underpowered energy beverage, and has lost nothing in its discontinuation.