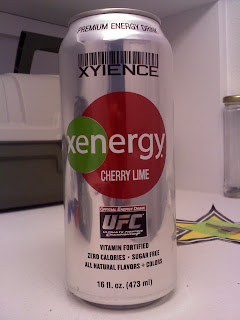 Not easy to find, but still short of being difficult to find.  Only one chain of gas stations around here carries it, and that only half the time, but it’s still a major chain, which by and large balances it out.

Never been a real fan of the extensive display of aluminum—always makes me think of words/phrases like "watered down" and "tasteless."  Xyience tries to make the template look nice, with some success, but even what colors they have don’t especially wow me—the particular shades of green and red just look way too old person décor-ish for my tastes.

I have very mixed feelings for the taste.  On one hand, it actually tastes real to a degree—how often do you get a drink that actually seems to try to taste like what’s written on the can (outside of the Xenergy line)?  On the other hand, the artificial sweetening of the drink bogs it down—the aftertaste of the sweeteners is strong, and even with all that the drink at times tastes watered down, with a strange texture that I can only describe as “foamy”—and no, I don’t refer to the carbonation; it’s something else entirely apparent only in the aftertaste.  Further points are taken off for the lack of cherry in the “Cherry Lime”, which seems almost downplayed into nonexistence here.

The subpar flavor of the drink had me ready for a subpar rest of the experience, but it packs a wallop appropriate for the official drink of the UFC—saying that a drink “packs a punch” has never been more appropriately put to use.  I was fairly jittery towards the beginning, but the phenomenon subsided after a half hour or so, following which I was very awake and alert.

Xenergy Cherry Lime Premium…well, goes the distance.  I was up and going for about as long as I could have asked for, with absolutely zero crash to speak of once the drink had worn off several hours later.

In conclusion, Xenergy Cherry Lime Premium is unquestionably effective as an energy drink, and Xyience earns my full respect for the obvious effort they put into making a drink that stands apart from the masses—it is a beautiful thing to know that there are people who are willing to take the risk inherent in creating something fresh and different, rather than taking the safe route and hashing out yet another Red Bull clone.  Still, such efforts don’t always result in a 100% payoff, as evidenced by the flavor of this particular beverage, which in my mind still has a ways to go before perfected.