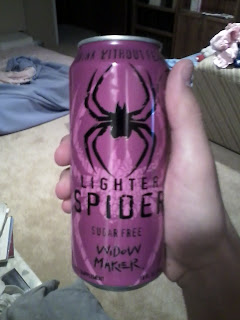 Given the nature of the Spider Energy line, I would expect to see gas stations, grocery chains, etc. positively inundated with their beverages.  Not so, regrettably—unless you plan on buying them by the case online (which is not a bad idea, incidentally), keep your fingers crossed, because it’s going to be a while before you find them.

Lighter Spider—Widow Maker is a perfect example of the fact that pink can be used with as much of a hardcore effect as any other color—just look at the can here and try to refute that.  That being said, it does have a look about it that suggests that it’s geared towards females—though I don’t know if that’s what they intended.  Regardless of whether it was or not, it does suggest that the company recognizes it that females betimes need a drink that delivers serious energy, and that in the event of such a need they deserve to have it met.  Also worthy of note is that the drink is figure-watcher friendly, having no sugar.

It wouldn’t have surprised me to have discovered that the flavor of Lighter Spider Energy—Widow Maker were different than that of the original Widow Maker, kind of in the same way Lighter Spider differed from the original Spider.  It was actually kind of surprised, however, not only to find that it was the same flavor—pomegranate and açaí—but that it was indistinguishable from the other.

What you get from Lighter Spider Energy—Widow Maker is about the same as what you get from others of the line—best described as a formidable blast of energy.  The thing I like is that it’s the sort of kick that really helps you get things done, and doesn’t waste its effects on having you bouncing off the walls—see reviews of other spider beverages if additional clarification is desired.