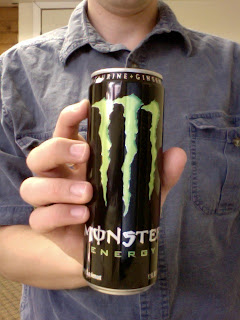 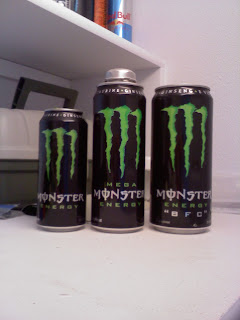 After my unfavorable (see below) experience pounding down the BFC, I was all but certain that I’d had my last taste of the original Monster.  Recently, however, I was walking through Fred Meyer when I passed by two enormous displays of the original Monster Energy and Monster Energy—Lo-Carb…in 12 oz. cans.  Given that 1) I couldn’t resist picking up a can of each, and 2) it’s been a while since I’d reviewed at least the original, I figured that now would be a good time for a revisitation.

The Monster Energy design is fairly simple, though the logo itself has become more or less a cultural icon—black background, glowing green Monster M prominently clawed into the front of the can…it manages to be pretty tight without doing too much.  It has the kind of look that screams, “I’M A FREAKING ENERGY DRINK!!!”, and is the first thing that pops into my head when I think, "energy drink," which I believe to be to its credit.  There is, however one tiff I do have with the line—the 24 oz. can has a nifty resealable lid, with the intent that the drinker takes down some at first, then saves the rest for later.  I like this feature, but why on earth would they include it on the 24 oz. size but not the 32 oz. BFC?

The taste of Monster Energy is a variation on what most people know as “Red Bull clone” or “traditional energy flavor” (special thanks to the Kronik Energy site for that last description)—best kind of description I can give is to compare it to a cross between the flavor of La Croix mixed berry seltzer water and green apple Jelly Belly jelly beans.  So many drinks have that same exact flavor that it’s easy to dismiss, but truth be told, I do like the taste.  Having drank Red Bull, I can say they’re almost identical, but I actually like Monster’s version  more—Red Bull has a notable medicinal aftertaste that is absent in Monster Energy and a sweeter, fuller flavor, and for that I believe it to be an improvement on Red Bull.

For being 1) not all that big, and 2) Monster Energy, I was actually surprised that this kicked as much as it did.  Not that it was huge, mind you—but enough to do the job.  It started off with about 30 minutes of good jitters—which passed and left passable alertness in its wake.

The slim can was average in terms of longevity, delivering about three hours of sufficient energy before running out of steam.

For the dollar I spent on the can, I thought this was alright, and don’t see any problem with trying it if you’re interested.  I still favor Lo-Carb—but we’ll save that for the review pertaining to that drink.

Monster Energy advertises itself as “meanest energy supplement on the planet,” though my experience with the 16 oz. (standard) can leads me to believe that this claim may be just a bit exaggerated.  Sure, the kick was there, it just wasn’t especially strong—just enough to keep me conspicuously awake.  It's mostly restrained, though a few hours after drinking it, I was waiting outside a rest stop outside of Burley, Idaho and realized that I was clogging as I waited—not something I do ordinarily.

Though it may not deliver the most hardcore kick imaginable, what you get will last long enough to keep you awake (about) as long as you need to stay awake…provided you only need a few hours.  The effects were pretty slow in wearing off, and I crossed the finish line without a crash.

While Monster Energy doesn’t exactly have reason to boast about its original beverage (at least in the standard pint size), it doesn’t have any real reason to be ashamed, either.  It tastes good, and though the kick isn’t really anything special when it comes to intensity, it is still sufficient, and it’s slow in wearing off.  It’s not the first drink that jumps to my mind when asked for a recommendation, but it still holds a place on the list of acceptably useful energy drinks.

The 24 oz. can is a step above the 16 oz. size, at least in terms of intensity—it’s enough to really wake one up, and produces a fair amount of jitters.  That said, by comparison with other drinks possessing the same amount of caffeine, it’s not all that impressive.

In the same way that it is intense enough to produce a decent pick-me-up, one will probably find it long-lasting enough to see them through most day-to-day energy situations.  A minimum of four hours of energy may be anticipated, and, as with the 16 oz. can, the experience will end without a crash.

I’ll say that the 24 oz. Mega can gets the job done, but all the same, it’s not something so grandiose that I am dead-set on recommending it.  I consider the whole experience to be exceptionally ordinary, but if you like Monster and the 24 oz. can is as big as you can find, then there’s probably no stopping you.

The original Monster Energy BFC was an…interesting experience.  As loaded with caffeine as it is, you would expect a good deal of energy, and that’s what you get—but there’s something about the experience that kind of diminished the enjoyability to a significant degree.  I just felt…off…for having downed so much sugar so fast, and through the jitters I could still feel my pancreas screaming, “MAKE IT F***ING STOP!!!”  So if you want to get wired, the BFC will do just that.  But, in my mind, it’s not worth it.

The BFC is fairly long-lasting—expect to get  at least five hours of energy out of it.

Like Monster?  Like caffeine?  Want diabetes?  Get the Monster Energy BFC.  As for myself, I’ve had my last.