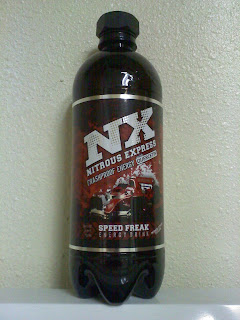 Seen this at a handful of places, but they’re always cheapest at grocery outlet stores.  If I were you, I’d check there.

This drink, like NOS (with which I’m guessing this drink is trying to compete), is obviously meant to appeal to the racing crowd—one of which I am not, but ni modo—this is a nice-lookin’ bottle.  I liked the lug nut-style cap, I liked the black bottle, I liked the black-and-red image of the dragster up front, and I like the straightforwardness in advertising (especially that part about “crashproof energy”—intriguing).  The aforementioned racing crowd appreciates things that look pretty high-octane, and will probably be quite satisfied with the whole getup.

I’ve read a few reviews on this drink, and everyone seemed to like it—I guess I’m just going to be the dissident in this review and say that I really disliked it.  I opened up the bottle, took a whiff, and gagged—it smelled positively rotten to me, like a orchard full of rotting mangos.  Didn’t look particularly appetizing, either—kind of a noxious pale yellow, with white shmutz of some sort hanging out at the surface.  Tasting it, I recall disliking it—didn’t taste as permeated with decay as it smelled, but I really couldn’t get around that stench—it hit me every time I lifted up my glass, and made my stomach do back flips every time I took a drink.

As bad as it tasted to me, I’m kind of glad I got such a nice kick out of it—I felt infused with energy, and even though I wasn’t terribly jittery as a result, it was obvious enough that I was buzzing that my wife called me out on it.

So…after the four-hour mark rolled around, it was time to see if the NX company was bluffing on their “crashproof” claim—I’m pleased to report that they didn’t.  With as much caffeine and sugar as you get, you’d expect to face plant pretty hard after the effects wore of, but I didn’t have any problems of the sort—I guess the quercetin was good for something after all.

So the kick will satisfy most caffeine junkies, but as far as taste was concerned, it was pretty rancid.  I’d stay away, but if you find your views jive best with reviewers like caffeine-a-holic, then you might want to give this a whirl.  Just don’t say I didn’t try to warn you first….