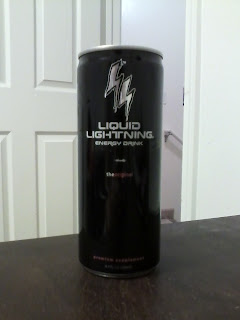 About 20 reviews back, I reviewed product #300—which was some size of Pepsi Max.  I decided to hold off celebrating until I received something more noteworthy, and I think reviewing a sample sent to me is a good way to do that.  So I’m celebrating 300 products reviewed with the review of my 320th!

Anyway, like I mentioned, the Liquid Lightning company got in touch with me a little while back about reviewing some of their drinks.  This is something I appreciate it—the way I see it, if you’ve got enough confidence in your product to send it out to reviewers (who may love it or tear it apart), you’ve got a product well worth considering.  Of course, this may work to your advantage or disadvantage—set the expectations high and meet them, and chances are I’ll rave about your drink.  But set them high and disappoint me…well, you might get more than you bargained for.

I got these as samples—so I have no idea.  Since the company’s based out of New Jersey, I’m going to venture a guess and say it’s more common out east.

Here, Liquid Lightning has me genuinely torn—there are things I love, and there are things that I’m not so wild about.  Biggest thing is the minimalist theme—don’t get me wrong; as a general rule, I like drinks that take a minimalist approach to packaging.  It conveys confidence when the company gets right to the point and doesn’t demonstrate an insecurity-based need to deck their cans with explosions and scantily clad women and fonts so EXTREME that they can scarcely be read without raising your blood pressure.  Problem with Liquid Lightning is that it might be a bit too minimalistic—almost to the point of being lifeless.  Now, I am quite fond of the double-L disguised as a melting lightning bolt and the more serious, Terminator-style fonts used on the can, but more can be done to make the can pop without turning it into an obvious attention whore, and I hope the company revamps it to reflect that notion at some point.  (Side note that doesn’t deserve it’s own paragraph: two out of the three cans of the original Liquid Lightning came in shrink wrap—Liquid Lightning company, don’t go down this road.  Nothing screams cheap the way shrink wrap does, except perhaps the combination of shrink wrap and a clashing yellow “99 cents” stamp.)

As I said—it seems to tell me that the parent company producing an energy drink has a good product on their hands when they’re willing to take a gamble and send you samples for review.  It did surprise me, then, when I opened up my first can and caught an obvious whiff of Red Bull clone.  Half bracing myself for another drink like Wired (the likes of which I have become very sick of), I poured it out into a glass of ice and took a sip.  Sure enough, it’s a clone—but, it is 1) very different from most others I’ve had, enough that I think if enough people gave it the chance it might grow in popularity, and 2) better than most.  The flavor is much more mild and less syrupy than most clones (notwithstanding the HFCS used to sweeten it), with a bit more of a citrus bite than I’m used to.  While Roaring Lion Sugar Free is still my favorite RBC to date, I think Liquid Lighting did an excellent job of tweaking the norm, and wouldn’t be surprised to see them carve themselves a sizable portion of the Red Bull target demographic.

At 100 mg per 8.4 oz. can, Liquid Lightning packs a relatively modest punch.  I was fairly alert and almost jittery for about an hour, after which I settled into a more muted yet effective level of energy.  My understanding is that the 16 oz. can has about 200 mg and probably is a little more substantial energywise; if I ever come across a can I’ll be sure to update this post.

About three hours passed before I felt the effects had worn off, with a relatively mild crash.

All-in-all, I’m impressed with Liquid Lightning.  I appreciate the effort that went into creating a new and tasty take on a customary (and often tiring) flavor, and the kick wasn’t half bad.  If you’re into the traditional energy drink flavor, I have no reservations against recommending that you give Liquid Lightning a shot.  As always, leave your thoughts below.