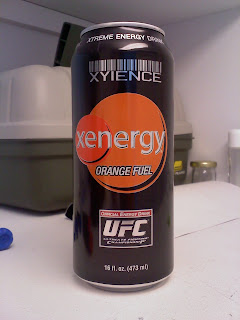 At least around here, Xenergy Xtreme Orange Fuel is very tough to find.  For some reason I can’t figure out, most places that carry Xenergy products only carry a few of them—I have found one place that has ‘em all, but that’s at Smith’s Marketplace in Highland, Utah.  So unless one is up to a long drive, finding this isn’t going to be easy.

I’m not as wild about the orange colors over black as I am with the green and red of Xenergy Xtreme Cherry Rush, but the getup is still pretty nice.  Looking the can over, it really gives very little to complain about.

With most of the Xenergy drinks I’ve had, I’ve either loved the taste or disliked it.  I’ve never felt neutral, as I do with this one—tastes like orange, as I would expect, but despite the fact that it tastes alright, it left me feeling kind of lukewarm.  Nothing bad about it, it’s just average—this isn’t good when you need to live up to expectations set by the likes of Xenergy Cran Razz Premium and Xenergy Xtreme Cherry Rush.

Xenergy Xtreme Orange Fuel’s performance is about on par with the rest of the products Xenergy issues, if anything it’s a bit less potent.  Still, there’s little that can be held against it in this regard.

I have no idea what happened here, but for whatever reason, Xenergy Xtreme Orange Fuel gave out long before would have expected.  I don’t have a clue why this would be the case; so far as I’m aware the energy-inducing ingredients found in all Xenergy products are found in Xenergy Xtreme Orange Fuel, so I can’t for the life of me figure why it would give out on me so much before any other Xenergy product would have.

As much as I hate to admit it, reviewing energy drinks (or anything, for that matter) is not an exact science, even though I try to get it as close to being such as I can.  What brings this up?  The fact that for some reason, Xenergy Xtreme Orange Fuel didn’t pull off what its cohorts had managed, and I haven’t the foggiest as to why.  At a later date, I will probably give Xenergy Xtreme Orange Fuel a second chance to prove itself, but until then, take my word for what it’s worth and go with something that has proved itself more dependable if your need to stay awake is desperate.