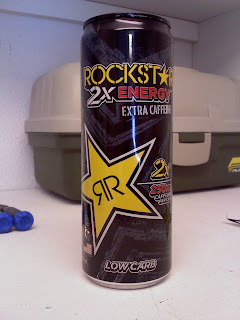 While visiting a friend in Utah recently, I was browsing the energy drink section of a gas station (something I do whenever travelling) when I saw something out of the corner of my eye that caught my attention.  It was dark, glossy, and flashy, and what’s more, it was something that I obviously not seen before.  I turned to see what this new and exciting beverage was, and I found myself eye to eye with Rockstar 2X, now coming in a 16 oz. can.

I very nearly burst into tears on the spot. 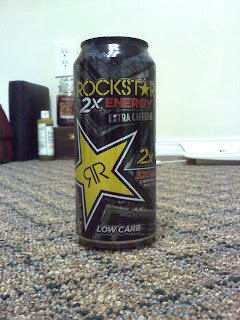 For the benefit of those reading my review of this drink for the first time, my first experience with Rockstar 2X (occurring just weeks after the release of the original 12 oz. slim can) was abysmal.  Though it had kick aplenty, it had to have been one of the worst taste experiences of my life—matched only by an oral rehydration solution I had in Colomba, Guatemala.  So naturally, I was less than excited at the prospect of reviewing the new can, which totes an additional four ounces of the stuff.

Nevertheless, I am bound by sacred oaths as an energy drink reviewer, and I sucked it up and took the can to the counter, my lower lip trembling as I waited for the transaction to go through, and my voice cracking as I specified “credit” when asked how I wanted my card ran.

Anyway, decided that day it would be better to get it over with and review the drink.  First, we’ve got the review of the 12 oz. can to get through, which I’ll be rewriting based on my post-16 oz. perspective.

Rockstar 2X can be found just short of everywhere, at least in the 12 oz. can.  I’m guessing the 16 oz. can will take a while to emerge, as most places are hard pressed (and with good reason) to get rid of the 12 oz. cans.

The first thing that benefits from Rockstar 2X’s transformation from 12 ounces to 16 ounces is the packaging.  It’s the same design and everything, with the exception of the bigger can.  However, with the smaller slim can, not all of the details that make the design awesome are readily obvious—something remedied by the upgrade, which brings those features out front and center.  The bright yellow star, the distressed black/crackled grey pattern emanating from that center star, and the hardcore font make this thing look seriously deranged—almost as though it’s saying, “Yeah, I’m obscenely caffeinated—but I’m okay with that.  In fact…I think I’m proud of it!”

I should have known things were going to go south when I opened the can and caught a whiff of the stuff—I mean, when the smell of something is enough burn your nose hairs, what do you think it’s going to taste like?  Anyway, the following is my original assessment of the 12 oz. can: “This stuff is bad.  No, it’s way beyond that.  Calling it "bad" is letting it off way too easy—this stuff is awful.  It’s a drink so vile that the idea for it had to have been conceived in the midst of some Rockstar employee’s dark night of the soul.  Initially, the taste is one part Rockstar, two parts artificial sweetener, and three parts cough medicine—which is gross, but if that were all there was to it, it would be merely disgusting.  It’s not.  The worst part is the aftertaste—a hot, acrid, miasma-like sensation that very nearly had me retching.  Wait, it gets even worse than that—that aftertaste isn’t like most aftertastes in more ways than its sheer badness.  Most aftertastes fade.  This one doesn’t.  It grows and it spreads and it doesn’t for a SECOND give any indication that it’s going to stop—more, it leads one to believe that it is trying to establish itself as a permanent among their taste buds, then be fruitful and multiply.  I don’t know how long it lasts for sure; I stole my friend’s Pepsi and rinsed out my mouth out with a swig as soon as I finished the dang thing.”

With 250 mg of caffeine, the 12 oz. Rockstar 2X packed quite a punch.  Thing is, as far as quality is concerned, it was kind of lacking.  It’s a really ragged kick, a sensation akin to going over a very bumpy road very fast.  It was more jitters than anything else—not really the functional sort of boost one looks for.

Rockstar 2X in a slim can has staying power to spare, I will say that much—I don’t recall how long it really lasted, only that hours later I was lying awake in bed, unable to sleep in spite of the fact that I was so tired.  In this respect the longevity is commendable, but a number of other drinks do that and more, and they don't taste like they want you to die slowly and in pain.

My final assessment of the 12 oz. can was as follows: “What were they thinking?  What madness could have driven the Rockstar Energy company, which has put out some of the best energy supplements on the market, produce such an unholy monstrosity?  If it had been anyone else, I would just assume that they’d never had an energy drink before and/or were partial to the taste of yak piss, but coming from Rockstar, this is inexcusable.  If you're thinking about trying Rockstar 2X—don’t.  Given the chance, pass it over and buy the original.  Or anything else available, for that matter.”

So…given the first impression Rockstar gave me with their original 2X product, it is understandable that I was not excited about reliving the experience.  Popping open the can, I braced myself—and was hit with the familiar smell of Rockstar.  By this point very confused, I warily took a sip, and to my utter astonishment…it was okay.  It wasn’t great; there were some artificial sweetener aftertastes there that weren’t very pleasant, but for the most part, it tasted decent—just classic Rockstar, for the most part.  Anyway, this has to be a new formulation—I understand that tastes change, but I remember how the 12 oz. can tasted, and this is not the same beverage as that one.

The new Rockstar 2X is insane—it has been a long time since I’ve had a beverage this potent; in a lot of ways it reminds me of the 24 oz. Rockstar Zero Carb.  It took only about 5 minutes before I was infused with an enormous amount of energy, with an extreme of every possible manifestation—jitters, alertness, shakes, extreme talkativeness, etc.

If you need something to keep you going all freaking day, the new Rockstar 2X is one of a handful of options that will do the job for you.  I got 8 or 9 hours of energy before I felt like the drink had worn off, and that came without a crash.

So even though the flavor still needs work, I can honestly say that the new Rockstar 2X was a success—it’s not so bad that I would mind at all drinking again, and the kick…well, the kick was marvelous, but it was intense enough that I’d only imbibe on occasion, and caution the usual sensitive-to-caffeine crowd to go with something a little lighter.

NOTE: Looks like as of May 2013, Rockstar 2X has been discontinued—which I find kind of a bummer.  While still distinctly lacking in the flavor department, the 16 oz. version is a drink that really earned my respect in the kick department, and I’m going to be hard-pressed to find a drink that can serve as a suitable replacement in that regard.