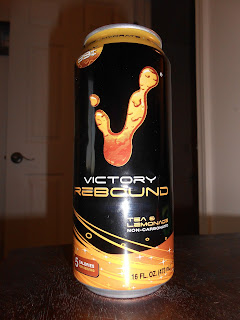 Not exceptionally common, but like the other Victory beverages, this one is probably going to be making lots of headway very quickly.

More exciting than either the original or fruit punch thanks to the yellow, but still extremely generic.  Additional points off for the cheesy 99 cent stamp and failing to list the caffeine content.

Seems that Rockstar Recovery—Energy/Tea/Lemonade was only the beginning of energy drink companies trying to get a cut of the profit Monster’s raking in from their original Rehab beverage by coming up with their own take (mind that I loved Rockstar’s version)—the Caffeine King reviewed two recently (put out by Red Rain and Gazzu), so it shouldn’t come as a surprise that Victory came up with their own take.  And true to the Victory trend, the flavor is crap.

Ever try paying for something with green Monopoly money as a kid, thinking your scheme was oh so clever and that nobody was going to catch on?  Somehow, I can’t help but feel that the same strategy was adapted and implemented by Victory, except rather than paying with green paper they’re throwing a couple of lackluster artificial flavors in with an energy blend and passing it off as a Monster Rehab alternative.

Who did they think they were going to fool?  Did they really think that Rehab drinkers, many of whom are absolute fanatics, would not be able to tell the difference between this piss-poor rip-off and their beloved beverage of choice?  In any case, this is a pretty pitiful drink as far as flavor is concerned, and an excellent reason to avoid the drink altogether.

It’s a pity the drink tastes so mediocre, because the kick is excellent—as intense as any Monster, and light years smoother than most.  D*** you, Victory!

Now, the silver lining in all this is that I have one final Victory beverage to review, and it really isn’t half bad.