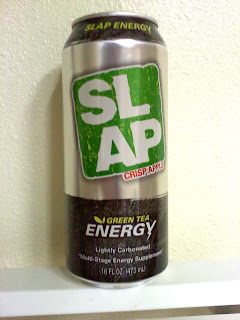 This one’s a little more hit-and-miss than the others—as with both Slap Frost beverages, Wal-Mart is the place to go if you’d like to get your hands on Slap Crisp Apple, though it’s a little more hit-and-miss than the rest—it’s found at a lot of Wal-Mart stores, but not all of them, and even then, it’s not always there when you look.  Makes it kind of a pain unless you live in a town with more than one.

You get the same look as the others—box with the word SLAP written therein, aluminum stripe between black stripes—except the box is a nice vivid green and there are some interesting art-ish dark grey illustrations of sorts scratched within the boarders of the black stripes.  Not bad, but nothing to write home about, either.

Opening the can, I smell green apple—and tasting it, I don’t taste it at all.  It’s got that same indistinct earthy fruitiness that Monster Rehab—Green Tea possesses (which I’m guessing is the green tea).  Why you’d make an apple drink that doesn’t have an apple taste is quite beyond me, but in any case, it still tastes good—just don’t go for this if you’re an apple fanatic, it may drive you to bloodlust.

Slap energy drinks have never let me down in terms of the kick, and Slap Crisp Apple is no exception.  This is not a waste-your-time-getting-started sort of drink—this is something you can count on for fast, intense energy—not the really jittery kind, just the wake-you-right-up-like-a-bucket-of-ice-water-or-an-explosion-nearby-except-vastly-more-pleasant kind.  It just works so nicely.

This’ll give you 5+ hours of effective energy, after which I did experience sort of a crash—or maybe that was just the night before catching up with me.  Either way, it was excellent while it lasted.

For 99 cents, there is no reason why you shouldn’t forego your regular Monster or whatever and give Slap Crisp Apple a shot, at least once so as to decide what you think.  It tastes better and kicks better than hosts of other less stellar drinks on the market, and does so at a price that won’t break the bank (Red Bull drinkers take note).  Great company, great drink, great price…what more can you ask for?