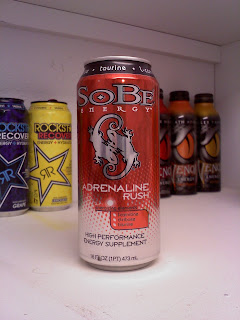 This one is reasonably common, though not as much as some.  If one grocery store doesn’t have it, just try the next.  Or the one after.  It should be at one of the two.

The can is kind of bland-looking, with silver and red predominating and the Sobe lizards front and center.  Not awful, but more could definitely have been done there.

This is probably one of the most in-your-face fruity beverages I have ever had, almost as though they took all the ripe tropical fruits they could get their hands on and concentrated them into this one beverage.  It would be far more agreeable if it weren’t sweet to the point that finishing the drink is a chore.

Not the most glaringly obvious thing I've had as far as kick is concerned, but dang if it isn't effective.  No jitters to speak of, but my 4-mile run quickly became an 8 mile run when I realized I could keep going and going and going….

The duration was reasonable.  Didn’t give out before it’s time, but I was still able to get to sleep relatively easy when bedtime rolled around.

The verdict: sure, it’s effective, but the question will be if you’re willing to drink it to get the boost.  As for myself, I’m aware of beverage that are as or more effective that taste far better than this one, and I suggest that you grab one of those.  Unless you really must give it a shot, in which case nothing I can say will deter you.

WEBSITE: sobe.com is the website, but it appears that Adrenaline Rush has been discontinued (couldn't seem to find it on the site, no matter how hard I looked), so don't have high hopes about finding anything about it there.