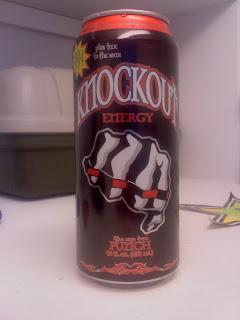 Almost always found with the original; the places that carry it are few and far between.  They seem to be most abundant in obscure locations, like remote highway gas stations.

Same issues I have with the original I have with this one; the name (think this through…“Knockout” as the stuff that will keep you awake…), the “99 cents” sunburst, etc.   Still, the basic design is sufficiently different from those of the drinks that you tend to see everywhere so as to be able to catch one’s eye when one encounters it, which I consider to be to its credit.

As indicated by the namesake, the drink is fruit punch flavored.  The drink was more carbonated than both Vegas Fuel and Rockstar Punched—Tropical Fruit Punch and less sugary (at least as far as taste is concerned) than the two, which led the experience to be at least reasonably agreeable, if not exactly outstanding.  Still, I’d strongly recommend Venom Energy—Death Adder if you really must have fruit punch.

Knockout Energy—The One Two Punch was quite unremarkable in this respect (again, like the original); it settles with providing a kick that simply borders on recognizable rather than being ambitious and actually providing something substantial.

The effects were reasonably long lasting, but given the fact that the kick was so weak to begin with, to what degree does duration make a difference?  Being just awake enough to do the job isn’t a pleasant level of energy to find one’s self in, but if you take this stuff down, you should plan on being there a while.

Essentially, this is just a fruit punch flavored variant of the original—unremarkable and uninspired in just about every way imaginable.  One can tell that as little effort as possible was placed into the drink, and the low price reflects the low value of the stuff.  If nothing else is available or if you're a collector, go ahead and try it, otherwise there's really no reason to do so.