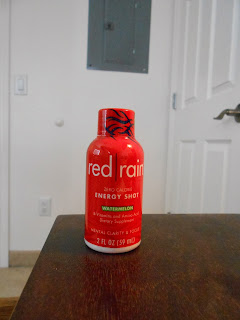 Not listed, but certainly moderate.

Readily available at your local K-Mart (which are themselves easier to find than they probably should be).

This small red bottle holds some aesthetically appeal in the fact that it is brightly colored and clean, though compared to the hordes of other energy products on the market it’s not particularly remarkable.  Points come off for Red Rain’s failure to disclose the caffeine content and that inexplicable, tramp stamp-like design wrapping around the bottle at the lid.

Red Rain’s watermelon energy shot is not so bad that it can be called a perversion of the flavor of the much-beloved summer fruit (as was Redline’s offering), but as far as any actual appeal is concerned it is still decidedly lacking.  It has a recognizable watermelon influence, but that’s where the resemblance ends, and the artificial sweeteners and bitter medicinal ingredients take over and give it that characteristically disagreeable energy shot bite.  Watermelon fans will certainly offended, everyone else simply put off.

As you might have noticed, I’m really grasping at straws trying to get this product reviewed—and that should tell you more about the shot than any extended rant I could write.  This shot offers so little by way of actual substance that it’s scarcely enough of an experience to review.  Avoid this one in favor of other readily available and vastly superior products.