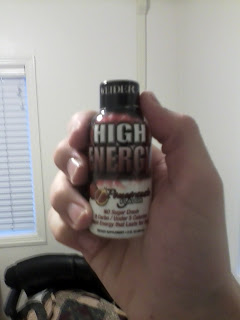 Not listed on the bottle—just lost in the 2500 mg or so “proprietary blend”.

Found at Wal-Mart, alongside the airline-approved travel size of Summer’s Eve Feminine Wash (off-topic—ladies, if you’ve got issues so bad that you need to carry a bottle of feminine wash with you on the plane, you need to see a doctor) and everything else you could possibly conceive of being priced at 88 cents.

This is a really, really, really badly packaged shot.  The only thing redeeming about it is that it’s the kind of bad that makes me smile—you know, kind of like watching Battle Los Angeles.  The whole thing is generally subject to horrible execution, but especially lame are 1) the mushroom cloud in the background, and 2) the name—High Energy.  I can see naming it something like “Energy Shot!” as long as you included an exclamation point to show that you weren’t taking yourself too seriously, but calling it “High Energy” and leaving it like that…that’s like something a 5th grader would name a shot and be proud of himself for coming up with it.

Just another bitter, medicinal, quasi-pomegranate shot.  If you like this sort of thing, okay, just go with Eternal Energy’s take—it’ll be around longer; the shot form of High Energy has been discontinued.

Above average, but at the same time, not all that exciting—just your run-of-the-mill alertness and jitters.

Three and a half hours, maybe?  Don’t remember a crash, but honestly by this point I was so underwhelmed I really wasn’t paying all that much attention.

Almost nothing here worth experiencing, much less writing a review about it—but hey, that’s my job.  Review the product, then recommend it or tell you to move along.  In this case, the latter is indicated