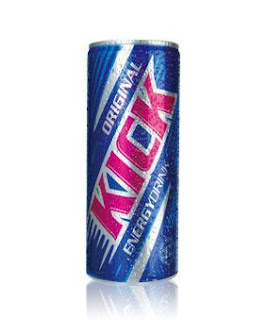 According to the company website, Kick is “the fastest-growing British energy drink in the USA and Africa, and is available in over 10 countries.”  In spite of this rather enthusiastic claim, I notice the distinct lack of a Beatles-esque invasion of British energy drinks into US markets, and I doubt that the relatively fast stateside growth of Kick energy drink translates into any kind of ease in acquisition.

Looks to me a lot like an energy drink—how’s that for descriptive?  In all seriousness, there’s nothing here to be critical about, but nothing to laud, either.  Maybe if it had an impressive set of British cheekbones I’d have something to write about….

What does one expect from a British energy drink?  Well, like all Americans, I have a number of positive stereotypes regarding British culture—felt robes, witty banter about Oxford’s superb performance in rowing, tea and crumpets, etc., so I’m expecting something good, something worthy of Sherlock to keep him awake on the case, or something to make The Doctor declare, “Pass me a Kick, Pond!”

Kick is a Red Bull clone.

I know—letdown, huh?  After all that, the fastest-growing British energy drink in America is a Red Bull clone.  To be perfectly fair, I found it to taste exactly like Red Bull, which most clones do not—and I say this just in case you’re a Red Bull consumer and desire to drink the same stuff out of a different can.  I don’t, so once my supply is gone (it came in a four-pack) I don’t think I’ll be revisiting it.

Kick isn’t anything special either, and is almost as much of a letdown as the taste.  It’s enough to make you feel slightly more awake, but not enough to proffer you any sort of boost in function.

Ballpark of hour and a half, two hours.  Don’t think that just because it’s weak that you can’t crash, because you really can.

Aside from its make there’s really nothing inherently British about this drink (so the novelty appeal ends there), and as far as taste and kick are concerned this is a tremendous letdown.  Don’t get too excited to find your four-pack of British energy; I’d pass it over for the multitude of tastier and stronger energy beverages out there.