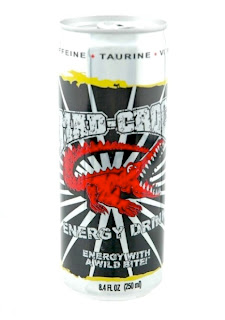 My travels have demonstrated that this is uncommon, but, once again, this was obtained through a trade with the editor-in-chief of possessedbycaffeine.com (which is without a doubt my favorite energy drink review site to go to)—so really, I have no way of knowing for sure.

Red Bull, Roaring Lion, Mad Croc…this sort of thing gets a bit tiring.  The crocodile on the front is a cool enough mascot, but from everything here I know I’m going to get another Red Bull clone…and I’m kinda tired of Red Bull clones in general.  So, Mad Croc, if you turn out to be an RBC, as I’m anticipating, you’d better be a good one.  Otherwise, I’m going to be grumpy.

Side note—I must admit…this particular can screams “Red Bull cone) far less than the can it came in when it first came out, which was such an obvious ripoff that they were sued by Red Bull.  Check it out here.

This is your standard RBC—except gummier, and with a slight hint of vanilla.  I actually didn’t mind the vanilla…but this is such an ordinary clone that after the first sip I just rolled my eyes and pounded the rest of the can.

Not the most formidable boost I’ve ever experienced by a long shot.  Might wake you up enough to help you study, but you’re going to need something a heck of a lot stronger for most anything else.

Two and a half hours of below average energy, slight crash after the fact.

The only thing this drink really has going for itself is the cool name, otherwise it’s just a standard RBC that has done nothing to really merit consumer attention.