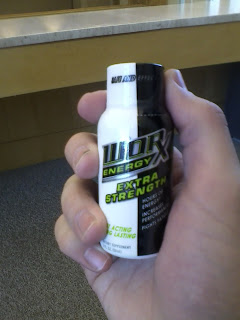 I’ve read a couple of different estimates; the number that most frequently comes up is 200 mg, followed closely by 193 mg.  From there, it’s all over the map.

I liked the look of the original Worx because of the color scheme alone—and I like Worx Extra Strength for that exact same reason.  The white, black, and this pale neon green go together very, very nicely, and in this case that’s all I really care about.

Tastes exactly the same as the original Worx—like something right at the halfway point between berry and citrus.  I really don’t know how else to describe it…even just leaving it at “fruity” doesn’t seem to cut it.  I will say, as I did in my review of the original, that 1) it is very clean-tasting, 2) that the almost-absence of bitterness is agreeable (there’s only a brief bit towards the finish), and 3) I like it more than any other energy shot I’ve tried to date.

Something interesting I’ve read is that Worx Energy—Extra Strength doesn’t differ form the original in terms of caffeine content, but rather boasts an increased dosage of B-vitamins and other such things as go in an energy blend—and that having been said, I don’t know whether what’s been said about the caffeine is true or not.  I can, however, tell you I noticed a HUGE difference in performance.

Without going into a whole lot of detail, I drank Worx Energy—Extra Strength the morning following a very bitter disappointment.  I walked that morning in a depressed stupor to my usual study spot at school, meditated on things a bit, and eventually came to the conclusion that things weren’t so bad, and that life would indeed go on as it always had.  Already being very tired from the late night and early morning, I opted to reach into my inside coat pocket and chug down the shot I had waiting.

I know that a “general sense of well-being” is a documented effect of caffeine, but let me tell you, I’ve never felt it this pronounced before.  Whatever Worx did different between this shot and the original was a good move—in addition to be exceptionally energized (more so than I experienced with the first), I really felt fantastic.

I don’t know if anyone else has had this experience (by all means post your thoughts either way), but if only to feel as good as I did, I’d be coming back to Worx.

Whatever tweaking was done with the blend did wonders for the longevity—seven hours, no crash!