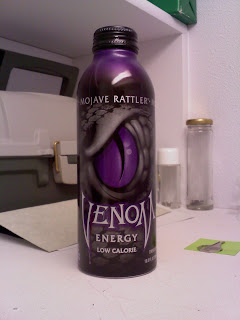 I found this one to be more scattered than the other three; for whatever reason most locations that carry Black Mamba, Death Adder, and Killer Taipan don’t carry Mojave Rattler.  In the end it is a bit of a pain to find.

If you’ve seen the Venom bottle, you know that energy drink packaging doesn’t get much cooler.  If you know anything about purple, you know that no other color has the same potential to make things look awesome.  Put the two together…well, you can imagine.  And if you can’t…well, that’s why I take and include a picture.

Mojave Rattler is basically the same drink as Black Mamba—just the traditional energy drink flavor with fewer carbs.  I wasn’t thrilled with the betimes-distracting aftertaste, but it had that wonderful Venom fizz that I’m so fond of.  If you like Black Mamba but don’t want to deal with the calories, the taste in Mojave Rattler isn’t so much different that a huge sacrifice would be made in drinking it.

This one works as well as any of the line—the intensity is about the same as Death Adder, except I found the effect to be more on the jittery side, so it’s not much of a comparison.  Regardless, it is in this respect quite effective, leaving little lacking.

I always like it when an energy drink has appreciable staying power, and Mojave Rattler has it in abundance—about as much as any (excluding the mutant Spike Hardcore Energy—The Original) on the market.

Even if I found the aftertaste is a little bit obnoxious, Venom Energy—Mojave Rattler tastes pretty dang good otherwise, and is very effective to boot.  And all this for only 60 calories…not a bad deal at all.