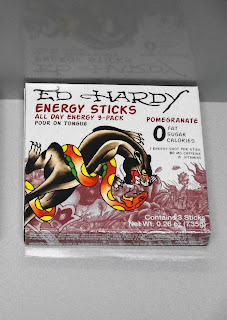 As easy to find as 7-Eleven—which is good news if you live outside of Idaho, which doesn’t have a single store.

The packaging doesn’t make a whole lot of sense unless you know that 1) Ed Hardy is a prominent American tattoo artist—hence the cool artwork, and 2) that Ed Hardy is also a brand of several different products, including clothing, hairdryers, and now, energy sticks—hence the fact that the box looks cool but the art has nothing to do with energy.  Now, if Mr. Hardy had been directly involved in designing the box, that would be something….

I can’t resist reviewing this right after I’ve finished reviewing Aeroshots, because in terms of flavor and convenience, this is everything that Aeroshots were trying to be but failed miserably at.  First thing I like is the fact that all I need to do to get to the powder is open the box and open the stout, Pixie Stick-like package.  Second thing is the fact that this stuff tastes really good—the powder dissolves very quickly in your mouth, releasing a clean, sweet pomegranate flavor with a very pleasant crystalline texture.

While they taste pretty good, these fall a bit short in terms of energy.  Mind, they’re not especially ineffective, but they’re not so strong as to make them ideal for anything but a mild boost—which I can betimes be content with, but more often than not I like something just a bit stronger.

Two and a half hours passed before I felt I could stand another energy stick—or something stronger.  No crash to report.

Shots are pretty tasty, but could use a little more power.  If that could be achieved, I’d be a regular user.